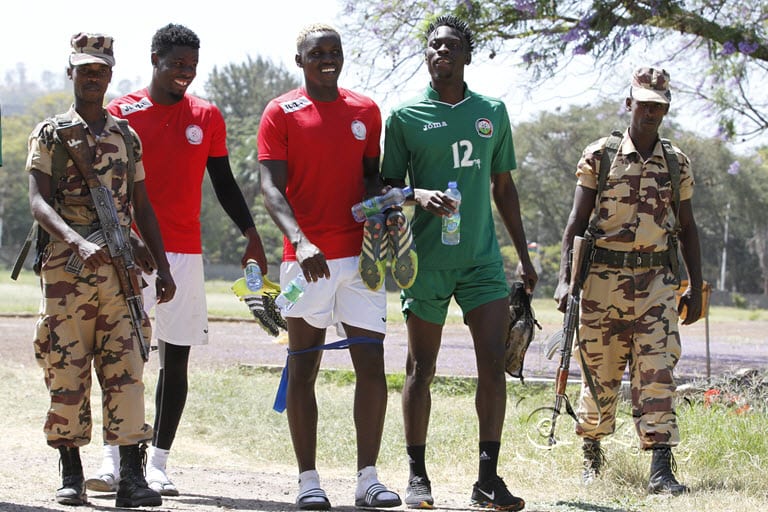 Kakamega Homeboyz acting coach and talisman Allan Wanga is relishing the challenge of guiding his club to a ‘good’ finish at the end of the season adding he might consider a permanent role in future.

The veteran goal poacher says he does not consider his new role a difficult one because he is banking on other teammates’ experience to execute his responsibilities as a player-coach.

Wanga and goalkeeper trainer David Juma were put in charge temporarily after the Kakamega-based outfit was hit by match-fixing racket that led to the sacking of Ugandan coach Paul Nkata, his assistant Hamza Kalanzi and suspension of midfielder George Mandela last week.

“I wouldn’t say I am acting as a coach. When coach Nkata was suspended, I was given the task to just guide and lead the team and that is what I am doing but I think I am concentrating more on playing than coaching because I believe our team has older and experienced players, so the team just needs guidance and a leader and that’s what I am doing.”

In his first match as coach, Wanga led from the front bagging a brace in their 4-0 rout of visiting Bandari at Bukhungu Stadium last week before drawing 1-1 against Western counterparts Vihiga United last Sunday.

The four points from the two matches have lifted the team to 10th place on the log on 13 points.

Wanga further affirmed that he might consider coaching in future but his focus currently is on playing and pursuing a second degree.

“For on now, I am just putting my concentration on playing and trying to take a second degree then after that, I will think about coaching. If it comes my way and I feel like I need to coach, I will cross that bridge at that time.

The prolific player-coach will lead his team in a points hunting mission on Thursday afternoon as they face 16th placed Chemelil.