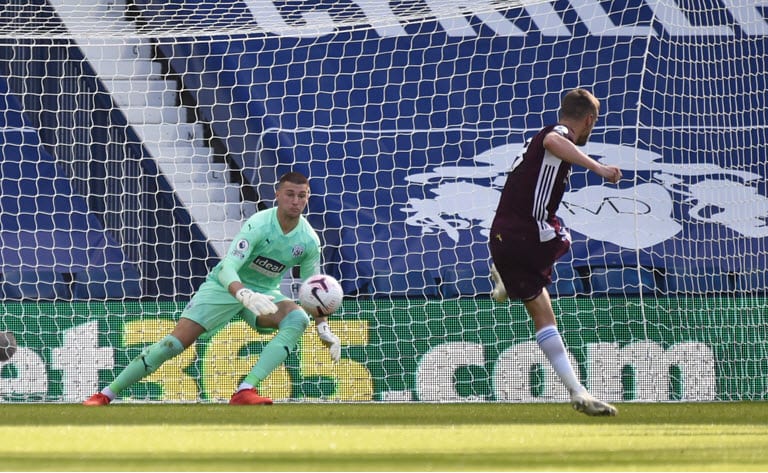 Jamie Vardy scored a second-half penalty double as Leicester condemned West Brom to a disappointing return to the Premier League with a 3-0 demolition.

After goalkeeper Sam Johnstone twice came to the home side’s rescue with saves to deny Harvey Barnes in the first half, new signing Timothy Castagne broke the deadlock when he nodded home a far-post cross from fellow Belgian Dennis Praet nine minutes after the restart.

Vardy, last season’s Premier League top scorer, then got up to score from the spot after being dragged back by Kyle Bartley as he chased into the box to support a move that saw Johnstone deny former Baggies loanee Barnes for a third time.

As playmaker James Maddison made a second-half appearance off the bench after recovering from a hip operation that crucially caused him to miss the end of the season, it was a good day for manager Brendan Rodgers and his team, who were winning this particular fixture for the fifth time in a row.

For West Brom, it was a brutal reminder of the task they face merely trying to stay in the top flight.

All three promoted teams lost on the opening weekend and – like Fulham, who were beaten by a similar scoreline against Arsenal on Saturday – there are early question marks over whether they have the quality to survive.

Leicester’s biggest away win since New Year’s Day provided a positive response to some major questions.

After looking like Champions League certainties for the first half of the season, a draining run of 17 games in which they claimed only four wins and 17 points saw Leicester overtaken by Manchester United for a top-four spot on the final day of the season.

Just as his side’s form nosedived, so did Vardy’s.

He may have been the Premier League’s top scorer but 17 of his 23 goals came before Christmas Day.

After toiling for most of the afternoon, Vardy’s day seem to be reaching an unhappy end when he limped away from a collision with Johnstone.

But the physio sorted Vardy out and within minutes he had scored. Ten minutes after that, he had another one.

The similarity of his penalties was uncanny. The run-up was purposeful, the shot powerful, both times to Johnstone’s left as the keeper went right.

“He’s a box player. He’ll never be dropping underneath with bright intricate play but he’s a killer in the box. Whether from a cross or penalty he’s got the eye to score. He never looked like missing.”

Maddison’s introduction was further reason for Leicester to cheer, although with a notoriously draining Europa League campaign to negotiate from the middle of October, it is fair to assume Rodgers will want more signings beyond Castagne, who has been brought in as a replacement for Ben Chilwell, who joined Chelsea for £45m.

“There is a load of work going on behind the scenes. We will see what happens in the next few days,” added Rodgers.

“Delighted with the guys who are here. We will try to improve this squad whether we get new players in or not.”