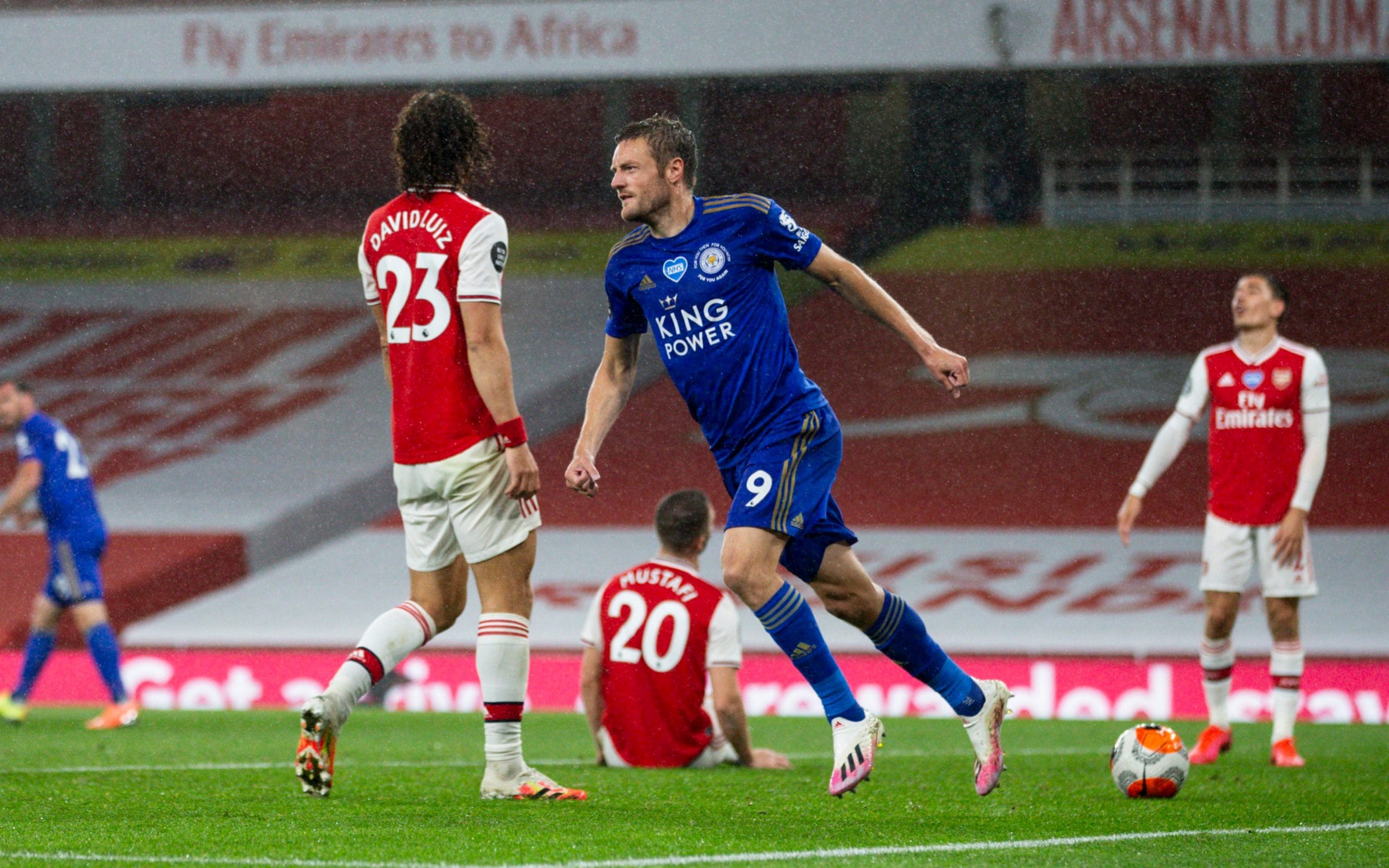 Jamie Vardy came off the bench to score a customary goal against Arsenal and send Leicester to within a point of the Premier League summit with a first win at the Gunners’ home since 1973.

Vardy, 33, had missed two games with a calf injury but was reintroduced after a largely sterile opening hour at Emirates Stadium and promptly ended a 262-minute goal drought in the league.

Until Vardy’s arrival Leicester had barely threatened but they have now won their opening three away league games for the first time.

Mikel Arteta’s Arsenal were disappointing and, despite dominating possession and having 12 shots on goal, never looked like seriously testing Leicester goalkeeper Kasper Schmeichel as they slipped to a first home league defeat of 2020.

The scourge of Arsenal

Four summers ago Arsenal  tried to prise Vardy away from Leicester and he continues to pile on the regret with every game.

He had only 11 touches after replacing Dennis Praet, but still scored the winner and was only denied a second by the head of Bernd Leno as he raced through on goal late on.

Leicester lined up with no forward at all in his absence, with winger Harvey Barnes nominally playing up front, and their lack of cutting edge meant James Maddison had all four of their efforts, all from outside the area, before number nine Vardy came on.

Their improvement was as marked as it was predictable with Vardy on the field, and it was no surprise when they grabbed the lead.

Youri Tielemans’ excellent pass over the top freed Under, and he squared for the free Vardy to score with a stooping header.

There is no more clinical player in the Premier League. Vardy has scored six goals from just nine shots this season – 20 fewer than Liverpool’s Mohamed Salah and one fewer than the champions’ full-back Trent Alexander-Arnold.

Last season Leicester capitulated from a position which seemed certain to deliver Champions League football, when they were 14 points ahead of Manchester United at the start of February. Could they seal the deal this time around?

Arsenal thought they had scored in the opening minutes when Alexandre Lacazette headed in from a corner, but Granit Xhaka and Pierre-Emerick Aubameyang were both offside.

From that point Arsenal controlled the game for the most part, but, despite Kieran Tierney raiding with intent down the left, they struggled to bust open the organised visitors.

Arsenal had 11 shots in the first half but Schmeichel’s only save of note came from the one effort after the break, pushing out a decent volley from Hector Bellerin.

Aubameyang, who has now gone five Premier League games without a goal for the first time, was largely anonymous.

Thomas Partey made a much-vaunted full league debut in midfield but was not alone in failing to shine as Arsenal moved the ball painfully slowly at times.