Van Dijk to have surgery on ACL 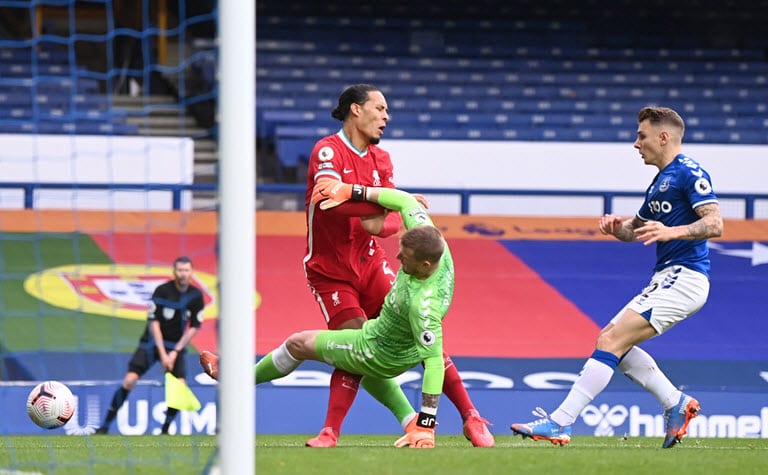 Liverpool centre-back Virgil van Dijk needs surgery on a knee ligament injury sustained in the 2-2 draw at Everton on Saturday.

The 29-year-old Netherlands defender was unable to continue following a rash challenge by Toffees keeper Jordan Pickford in the first half.

It is unclear how long he will be out for with the anterior cruciate ligament (ACL) injury.

He went for a scan before a specialist confirmed the extent of the damage.

Returning to action after ACL surgery can take many months and Liverpool will not specify how long the Dutchman will be out for until after his operation.

Surgery will not be immediate and the operation has yet to be arranged.

Club sources are reluctant to rule out a return to action this season, as much will depend on his rehabilitation.

Van Dijk has been a key figure for Liverpool since signing for them in January 2018 for £75m.

He has played every league game for the club in the past two seasons as Liverpool finished second in 2018-19 before winning their first top-flight title in 30 years in 2019-20.

The Dutchman was also a leading figure for the side as they won the Champions League in 2019 and Club World Cup later that year.

He had played seven times for the Reds this season prior to the Merseyside derby.

Gomez and Matip have never started a match together as centre-backs for Liverpool. Before Saturday’s Merseyside derby, the last time they both played in that position for any part of a game was the last hour of the 4-1 defeat by Tottenham in October 2017 at Wembley

Midfielder Fabinho deputised at centre-back in the win at Chelsea earlier this season.

“We won’t know until the end of the season how much impact it will have on the Liverpool squad. There will be a sense of togetherness. It will definitely hinder their defence of the title,” said former Liverpool defender Stephen Warnock.

“It’s that old cliche: ‘Let’s win it for Virgil and make sure we have something to celebrate at the end of the season.’

“But when you are in the changing room, you look across and you haven’t got Virgil van Dijk – this big colossus of a player. Defensively when things are going well and you turn back and see Van Dijk, it’s okay. Now you turn back and he’s not there.

“It’s not being disrespectful to the players that are in there but he is their number one centre-back – someone who has performed to such a high level since he has come into the football club.”

In addition to Liverpool, the Netherlands will be keeping their fingers crossed he will be fit to take part in the postponed Euro 2020, which is now set to take place from 11 June to 11 July 2021.