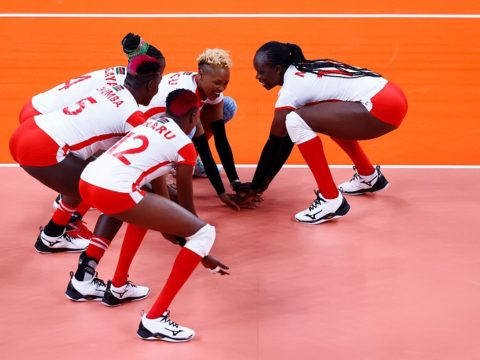 The Kenya Pipeline duo of Esther Mutinda and Yvonne Sinaida and DCI’s left attacker Veronica Adhiambo have earned their first call ups to the national women’s volleyball team ahead of the Women’s Africa Nations Championships in Rwanda.

The trio were named in the final Malkia Strikers 14-member squad announced by head coach Paul Bitok on Wednesday ahead of the team’s departure on Friday for the premier championship which serves off Saturday at the Kigali Arena.

Seasoned Kenya Prisons libero Elizabeth Wanyama returned to the squad after she had failed to make it in the final 12-member squad for last month’s Tokyo Olympics.

The nine-time African champions will however miss the services of experienced duo of setter Jane Wacu and left attacker Noel Murambi after the two Olympians opted out of the squad last week due to injuries.

Pipeline’s Mutinda will jostle for the setter position left by Wacu, who turns up for Seychelles side Anse Royale, against regular Joy Luseneka while Adhiambo will fight for the starting berth in the left attacker position against captain Mercy Moim, Leonida Kasaya and Pamela Jepkirui.

Prisons middle blocker Anne Lowem, who was in the provisional squad after she recovered from a nasty knee injury she picked during the 2017 FIVB Volleyball Women’s U23 World Championships Slovenia, was dropped alongside Josephine Wafula of DCI.

In a statement, Bitok said it was about time to inject fresh blood in the team as he plans to gradually overhaul the aging squad.

“After the Olympics it’s now time we start the journey of building a new generation of young players.  It might be a tough transitioning time for us but with consistent training and determination, Kenya will always remain to be a champion.

“I also take this opportunity to encourage each individual to give all their best so that you build your name and become a star by yourself. These can only be achieved by straight hard work and discipline,” he said.

Bitok also vowed to reorganize the team that can comfortably cope with the changing trends in the dynamic sport of volleyball.

“The target is not only to participate in the 2024 Olympics, but to even challenge for the podium position. We will do that by having a strong team and I know the faces I have now introduced will be very strong by 2024,” he added.

Malkia Strikers, who last won the biennial championship in 2015, will be eyeing to reclaim their title from bitter rivals Cameroon who have stood between their record tenth title in the last two editions.