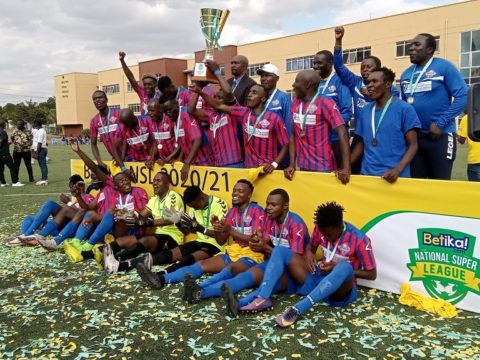 Football club Talanta were crowned National Super League (NSL) champions at the GEMS Cambridge School along Magadi Road on Sunday after culminating their stellar 2020/21 season on 72 points, eight points ahead of their closest rival Vihiga Bullets.

In the build-up to the coronation, Talanta defeated minnows Rongai All Stars 2-0 in a friendly match after their NSL opponents, Gusii FC staged a no-show.

Their title triumph and subsequent promotion to the FKF-Premier League was a culmination of nine years of anguish in which the team had unsuccessfully attempted promotion five times since 2016 and have to thank seasoned tactician Ken Kenyatta for galvanizing a formidable force that earned them their biggest achievement since inception.

Speaking to Citizen Digital, an elated Kenyatta lauded his charges for delivering on their season objectives, while expressing optimism that his team will not struggle in the topflight next season.

“We are all winners today and it is thanks to the combined effort from every one of us. We set out to win the season and am glad it came to pass.

Our focus now shifts to staging a good start to life in the top flight and am optimistic we have what it takes to challenge the crème de la crème of Kenyan football.”

Marksman Anthony Gichu who finished the season with ten goals was chuffed at their achievements while urging his teammates to swiftly switch their focus to the Premier League.

“I cannot say that I played a more significant role than the rest of the team because we all worked to see our dream come true.

“I urge the rest of the team to now focus on how we can play well in the top tier which is very tough compared to the NSL.”

Elsewhere Vihiga Bullets will play in the top tier league after defeating Kibera Black Stars 2-0 on the final day to finish the season as runners-up and secure the remaining automatic promotion slot.

Kenya Police who finished at number three will now face off against Vihiga United in the NSL/FKF-PL playoff.