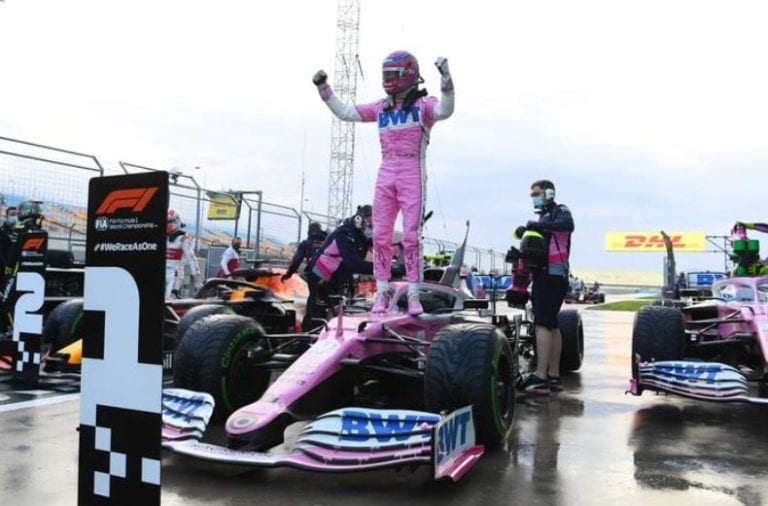 While the 22-year-old Racing Point driver celebrated wildly over the team radio, six-times world champion Lewis Hamilton qualified only sixth for a race likely to crown him world champion for a record-equalling seventh time.

Mercedes, whose pole run extended back to the 2019 season-ender in Abu Dhabi, never looked in contention on a track returning for the first time since 2011 but made slippery by rain and newly-laid asphalt.

Stroll, whose billionaire father Lawrence owns the Silverstone-based team, stepped up when it mattered as Racing Point timed the switch from wet to intermediate tyres to perfection.

The Canadian, who has come back from missing a race and testing positive for COVID-19, will be his country’s first pole-sitter since 1997 world champion Jacques Villeneuve.

“I can’t put it into words right now. I’m shocked. I didn’t expect to be here,” said Stroll, who had greeted his pole with shouts of ‘let’s go, let’s go’ before declaring ‘I love my job.”

“I had the confidence in the car and I just nailed pretty much every corner. It’s such a nice way to bounce back after a few rough weeks, so it feels really good.

“It’s a special moment for me, one of the biggest highlights of my career.”

Red Bull’s Max Verstappen joined Stroll on the front row, a disappointment for the Dutchman after topping the timesheets in every practice session even if the Friday lap times were largely irrelevant.

“When you are first all the time and come out second it’s not what you want to do. I just hope we have a good race tomorrow,” he said.

Australian Daniel Ricciardo, for Renault, qualified fifth and ahead of Hamilton, who has a record 97 F1 poles but this time could find no grip.

“We tried our hardest and did the best we could and that was the fastest we could go,” said the Briton, who had slated the surface on Friday. “The track feels terrible.

“It’s just like driving on ice. For whatever reason some people can get the tyres switched on a little better than us. I think ultimately we were all struggling out there but some are better than others.

“I did the best I could. I didn’t spin, I didn’t really make any mistakes so I did everything I could with what I had,” he added.

Bottas, who must score at least eight points more than Hamilton to remain in mathematical contention with three races remaining after Sunday, said he could not get heat into the tyres.

“I think today the teams that could get the tyres to work are at the top and we didn’t do a good enough job today,” said the Finn.

If his chances of winning appeared to have receded, the slippery conditions caused by the rain and newly-laid asphalt left plenty of uncertainty hanging over Sunday with neither Mercedes driver comfortable in the car.

The first phase of qualifying was twice red-flagged with long delays as the rain intensified and drivers spun off.

Verstappen was left in 15th place and on the cusp of elimination with three and a half minutes remaining and the opening session stopped.

He then lapped eight seconds faster than anyone else to go through, with Hamilton only 14th.

The second phase started alarmingly with a crane still recovering Nicholas Latifi’s stranded Williams from the side of the track as cars ventured out.