Sprinter Omanyala gifted with a car

By John Kyanda For Citizen Digital 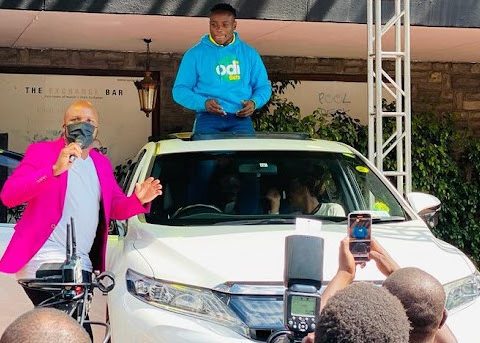 Africa’s fastest man Ferdinand Omurwa Omanyala has been gifted a brand new Toyota Harrier by his sponsors at a ceremony held at a Nairobi hotel Wednesday.

The Kenyan became the fastest man in the continent after clocking a time of  9.77 seconds at Saturday’s Kip Keino Classic meeting in Nairobi to break the mark of 9.85s set by South Africa’s Akani Simbine in July.

While receiving the gift from a betting firm, Omanyala said the world should brace for a great performance from him.

“I am a person who doesn’t look at my past I focus on the future that’s why my aim is to improve in each and every race that I ran.  I want to show improvement and that will continue happening,” said Omanyala

Omanyala insists that he can go even faster than his current record something only achieved by the world record holder  Usain Bolt of Jamaica, his compatriot Yohan Blake and the USA’s Tyson Gay.

“It’s never easy facing the giants because before a race you hear the announcer reading their personal best timings and if you are not steady you can lose focus but for me, I know my ability and their records is something that inspires me to work even harder to beat them and set new records,” added the sprinter.

He went on to encourage parents to support their children in their sprints careers citing his father’s influence when he bought him racing spikes at a tender age to inspire his racing ambition.

“There are many people in Kenya who can run fast but they don’t believe in themselves because they are being told you can’t make it from the sprints but they can take an example from me and know this sport can pay and one can make a leaving out of it,” stated Omanyala