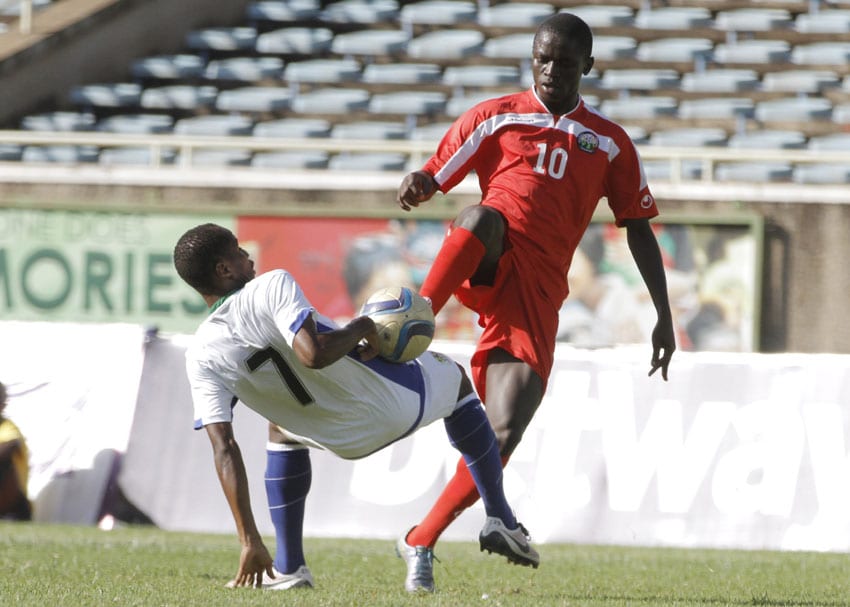 Captain Victor Wanyama converted a penalty to secure Kenya a 1-1 draw against Tanzania in an international friendly match played at the Safaricom Stadium Kasarani on Sunday.

Tanzania had opened the score through Elias Mrugao early in the first half before the English Premier League side Southampton FC midfielder salvaged his nation’s pride by striking back before the break.

Spain based Ishmail Gonzalez who accepted the invitation to play for the nation of his father’s birth did not earn his first cap.

“We still have two other matches, he has a chance but he has to fight for a place in the team,” Stars first coach, Stanley Okumbi- who is yet to win a game with the national side since his shock appointment in February- said of the defensive midfielder who is signed by second division side, Las Palmas.

“It is good to score but it was difficult. We have to restore faith in our fans so that they come back to the field. Today we had some new players who need more time to gel with the rest in the team, that’s why we need more friendlies,” Wanyama stressed.

“We are happy with the result because we fielded a young side but they played well being an away match. Kenya is a big team with big names. We should have beaten them was it not for the penalty. We have other senior players who should strengthen the team as we play Egypt on Saturday,” Taifa boss, Boniface Mkwassa offered.

Despite missing key players in their squad, Taifa Stars pinned Harambee Stars to their own half for the better part of the game.

It was the visitors who had the first real chance in the fifth minute, when Mwinyi Kazimoto was well picked by Erasto Nyoni but his shot was straight at Stars keeper Boniface Oluoch, who punched it out before Zesco United’s David ‘Calabar’ Owino cleared the danger.

Five minutes later, Tanzania’s Shiza Ramadhan outpaced Bulgaria based Aboud Omar on the right, to unleash a powerful shot that went wide with Oluoch out of position.

Kenya’s first threat came in the 24th minute when Omar swung in a menacing free-kick into the box to find Owino who placed his header inches off target.

Tanzania drew first blood when Mrugao of Shinyanga based Stand United connected a Juma Abdul Jafari’s pin-point cross from the right with a powerful header in the 35th minute.

Belgium based Ayub Timbe and Mathare United’s Eric Johanna swapped flanks, the former shifting to the left from the right where he had started.

And the switch paid off when five minutes later skipper Wanyama cancelled the lead from the spot sending keeper Deo Munishi the wrong direction after Timbe was fouled in the box.

Kenya should have led going to the break, but Zesco United’s Jesse Were failed to tap in a fine cross by United’s Johanna in the 45, inside the six yard box.

But Tanzania continued to dominate, and Okumbi brought on Ajax Cape Town’s Victor Ali Abondo in place of Anthony Akumu, and Ulinzi’s John Mark Makwatta for Timbe seeking to find a winner.

Tanzania’s coach Mkwassa responded by withdrawing the Mrugao for Juma Ally, but no more breakthrough would come.