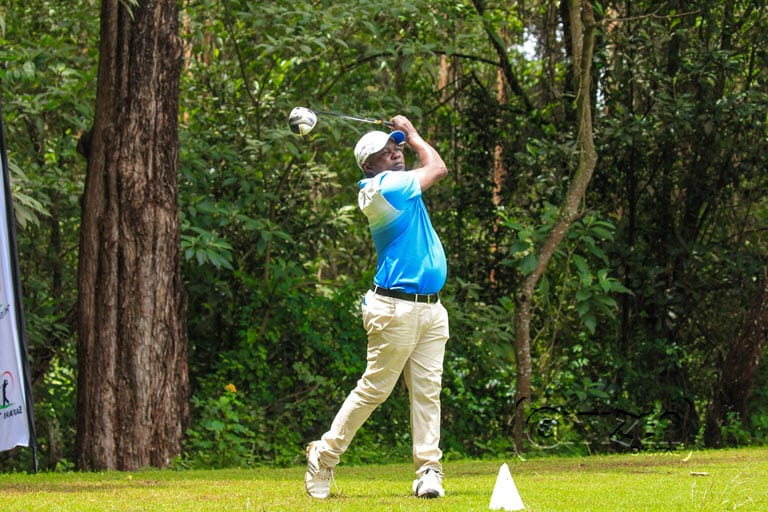 David Opati fired a third round score of 3-under par 69 to climb to the top of the Safari Tour event at the Limuru Country Club.

Opati started the day a massive six-strokes behind overnight leader Greg Snow and he wasted no time closing the gap, firing birdies on the par-5 third, the par-4 sixth the par-4 ninth and par-3 14th. His only blemish was a lone bogey on the tough opening hole at Limuru.

Opati will enjoy a three-stroke lead going into the final round.

The story of the Safari Tour leg at Limuru however belongs to the gallant amateur golfers who have continued to impress and compete at par with the professionals.

The young 15-year old Taimur Malik from the Windsor Golf Hotel and Country Club had a shaky third round and a score of 82 pushed him back to T22. However, the lessons this young golfer will take from Limuru will serve his well as he continues to pursue a career in golf.

Limuru’s elite amateur player, Karichu continued to struggle at his home course and is currently lying T14 with a score of 221. Amateur Mike Kisia is in 19th place with a total of 228.

Snow, who led the event after two rounds, had a terrible day through his third round, finishing with a round of 7-over par 79, his worst performance on the Safari Tour season to date. Snow failed to make a single birdie through 18 holes, he had a double bogey on the challenging par-5 fourth, a hole that is dubiously know for having two doglegs! He dropped shots at the first, fifth, 14th, 15th and 18th holes and with this performance he lost his six-stroke cushion and perhaps the championship.

Snow now lies in fourth place, 4-strokes behind Opati with only one round to go.

The final round of the Safari Tour leg at Limuru Country Club will now be an epic battle between the professional golfers and the elite amateur golfers.

Opati will be looking to win his first Safari Tour event, Snow will be eager to win back to back events, Indiza, who is currently in T5 position and six strokes behind will be hungry for his win whilst the two top amateurs, Mudanyi and Karanga will have nothing to lose, having proved they can play as well as the Pros.