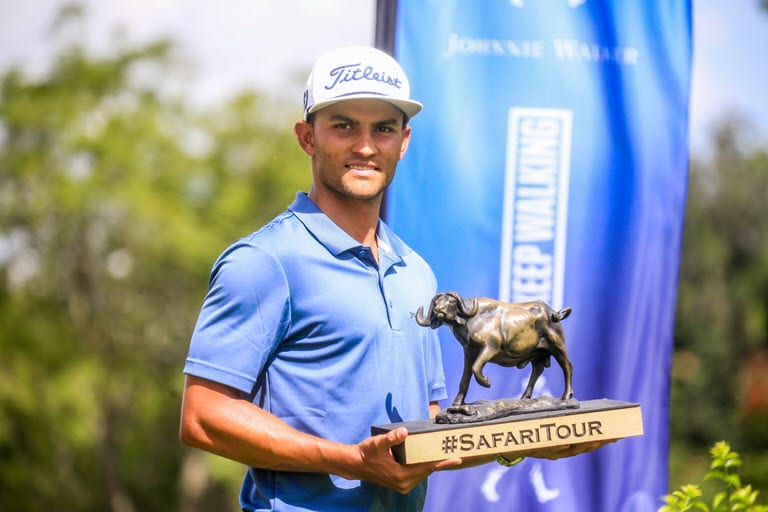 Muthaiga Golf Club’s Greg Snow shot an impressive round of 68 on the last day of the final leg of the 2019/2020 season of the Safari Golf Tour Series at the Karen Country Club to emerge winner of the tournament with a total score of 4-under par 280.

On the back nine, he got off to a birdie at the 10th and followed it up with another at the 12th before holing yet another birdie at the 14th to go 6-under par for the day.

He however shot a double bogey at par-4 15th and another at the par-4 18th to card a back nine total of 36.  With the Karen win, the Johnnie Walker-sponsored Snow banked KShs 450,000 and took his wins for the season to five – the most of anybody on the calendar.

At the same time, Thika Golf Club’s Simon Ngige shot an impressive round of 2-under par 69 to take his total for the tournament to 1-over par 285; seeing him clinch second place and banking KShs 300,000.

Meanwhile, Dismas Indiza completed the podium places after he ended his Karen Country Club campaign with a round of 72 to take his total to 2-over par 286; having carded 36 on the front nine and another 36 on the back nine.

Zimbabwe golfer, Robinson Chinhoi, ended his outing at the tournament as the highest ranked regional player after he shot the lowest score of the week, a 4-under 67 taking his total to 4-over 288.

He finished tied in fifth alongside Muthaiga’s Geoffrey Makokha. On his part, Zambian Madalitso Muthiya finished in eighth place with a 5-over par 289 score.

Meanwhile, the list of eight Kenyan players who have qualified to play at this year’s Kenya Open was announced on Wednesday.

Dismas Indiza, who finished the season as the overall leader of the Road to Kenya Open Ranking, Simon Ngige, Greg Snow, Erik Ooko, David Wakhu, C.J. Wangai, Riz Charania and Jastas Madoya complete the list of Kenyans to play at the Kenya Open.

Robson Chinhoi and Nigerian Andrew Odoh are the two regional players who will play at the Kenya Open having qualified through the Safari Tour.

Two other regional players, Toto Thimba and Jayden Schaper from South Africa, have been invited to play at the tournament.

Season Three of the Safari Tour resumes starting May this year with an increased number of tournaments across four East African countries – Kenya, Uganda, Tanzania and Rwanda.