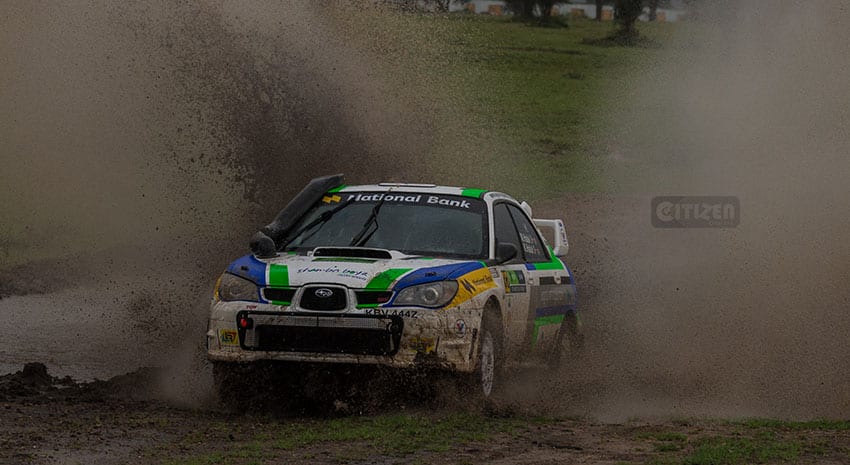 The Shamba Boyz Rally Team of Mahesh Halai and Ketan Halai finally laid their hands on Kenya National Rally Championship (KNRC) honours after four years of trying when they wrapped the Division Two drivers’ and navigators’ titles in the just ended season.

Despite finishing down the order in 11th during the season-ending 37th KCB Guru Nanak Rally on Saturday, the pair celebrated without abandon in an event that also signalled curtains on the bank as title sponsors of the KNRC.

Their calm and assured drive out of the last control at Aberdare Hills Golf Resort belied the excitement that was bubbling underneath and it exploded into unbridled joy at Sikh Union Club Nairobi which hosted the events prize giving.

Ketan, who skipped the penultimate Kitengela round due to pressing job commitments, made amends upon guiding his uncle Mahesh to 11th overall position at Guru Nanak having started his rally career alongside his uncle four years ago.

Mahesh started out as a navigator to Nishit Shah in the late 1990s with the National Bank of Kenya-sponsored Shamba Boyz driving their Subaru N12B to the double-title having upgraded from the GC8 model of the same Japanese car maker.

While Mahesh sealed his championship at penultimate stage in Kajiado County earlier in the month, Ketan joined him at the winners’ rostrum on final day.

The Shamba Boyz have been fighting with newly crowned 2WD champion Eric Bengi who cemented second position in Division Two.

“It’s good, I mean it feels really nice to lay our hands on the coveted titles as we have been trying to fight for the championships which saw us challenge for podium positions in our categories and finally after four years something’s has come out of it, so its hasn’t sunk in yet,” the excited Ketan said.

“Our major worry was to keep the car clean and make sure we did not pick any punctures along the way as this would have meant losing positions. The car preparation was the key to our success and I would like to thank the crew for their level headedness,” he added.

Chandrakhant Devji of Kisumu won the Group S championship after his closest rival to the crown Edward Maina retired.

Following his Bengi Two Wheel victory, Bengi announced he was graduating to Group N next season in an ex-Don Smith Subaru Impreza.

His Toyota RunX will now be driven by Charles Hinga who is making a comeback after a two years hiatus.

“Its a very good day for us. The trophy has finally come and that’s what we have been pushing for the whole season. We will be driving a Subaru to push the competition higher just like Tapio did. The season was good though we had a low moment in Safari Rally where we lost points and the mishap we encountered in Eldoret,” Bengi said.