Shakava: We can make 2019 season bigger and better 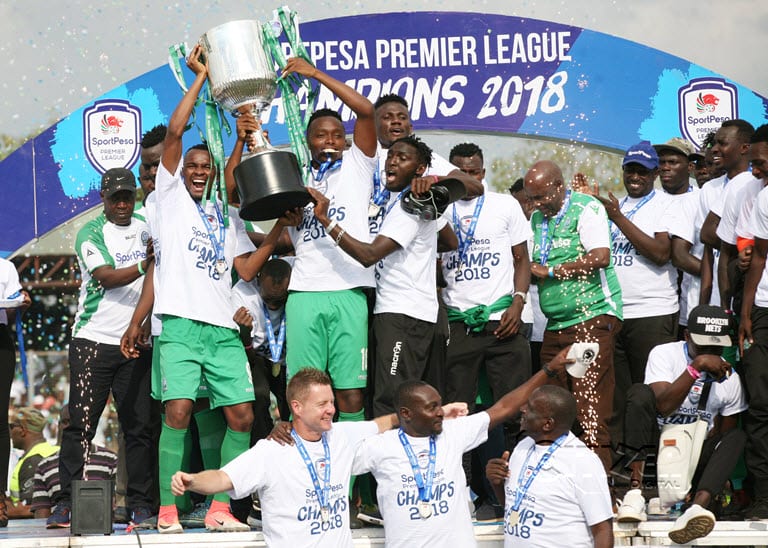 Soon after lifting aloft the Kenyan Premier League (KPL) title on Sunday before an adoring crowd at the sun-baked Moi Stadium, Kisumu, Gor Mahia captain Harun Shakava shifted the talk to the club’s preparedness for next season.

With Gor out of all the other campaigns for this term, Shakava noted proper planning can fire the 17-time KPL champions to more glory in the coming one, including retaining the league title.

However, he cautioned every season is different from another in several ways, noting no one can guarantee perfection.

“This season has been very good for us. We tried our best despite playing in many competitions until fatigue finally ruined our unbeaten record,” he said. “We can always look forward to doing better, but good records are not achieved automatically. We don’t know what exactly next season holds for us but with proper planning and commitment we can make it even better,” averred Shakava.

Alluding to the recent disarray that saw players boycott training for almost a month due to unpaid salaries and allowances, the skipper urged the club leadership to over such loopholes to ensure a more glamorous season in 2019.

“It is very simple,  department doing their job. If the players, the office, technical bench and fans play their part with utmost commitment, then we can avoid small setbacks that we have seen this season. A good job can be tainted easily by taking things casually.”

Shakava, who took over the captaincy from former Gor defense maestro Musa Mohammed early this year, was one of the key players who missed some of the matches Gor lost in a row, during the boycott, aggravated by the club’s executive failure to pay the playing unit August salaries on time as well as staggered allowances.

Subsequently, in a bombastic press briefing, club boss Ambrose Rachier blamed the boycott on officials whom he claimed were inciting players, pledging to “do the best” to avoid such scenarios in the future.

With the 2018-2019 season not far from kicking-off in realignment with the new CAF- Club’s calendar, Gor are already strengthening their squad with two key signings reported so far.

The ever industrious left-back signing was recently announced alongside that of 2017 KPL Most Valuable Player Kenneth Muguna, who is returning to Gor after uninspiring Albania sojourn where he featured for FK Tirana.

It is such moves that Shakava notes are encouraging looking at the challenge ahead.

“We all know what they (Batambuze and Muguna) have previously done in KPL. If they are confirmed in, they will be definitely good additions. We lost Walusimbi and Batambuze can be a perfect replacement. He will only need to adapt to play under pressure, because that is part of life at Gor. Everyone expects a lot from every team member,” remarked Shakava.

Of Muguna’s return, the captain said the talented midfielder will bring exciting competition in the midfield.

“Muguna knows what it is play for Gor, and looking at the players we have in the midfield, he will offer interesting competition and depth that is very necessary. We will be in featuring in several competitions just like this season, and depth matters a lot when you are playing almost every day,” he underlined.

Besides KPL title defence, Gor will be representing Kenya in the CAF -Champions League and and Cecafa Kagame Club Championship next season.

The Football Kenya Federation (FKF) Shield and the Super Cup that is sponsored by a leading book marker in the country are other assignments awaiting Gor.

Meanwhile, Gor players were handed Ksh.5 million by former Prime Minister Raila Odinga, for their exploits in KPL this season.

Raila, who was the chief guest at the Moi Stadium Kisumu during the coronation, gave Ksh. 500,000 more than the KPL Limited prize money for the title.

The entire amount will be going to the players and the technical bench as confirmed by Rachier.

“The money will not be touched by officials, that is a player’s affair,” the club patron  stressed.