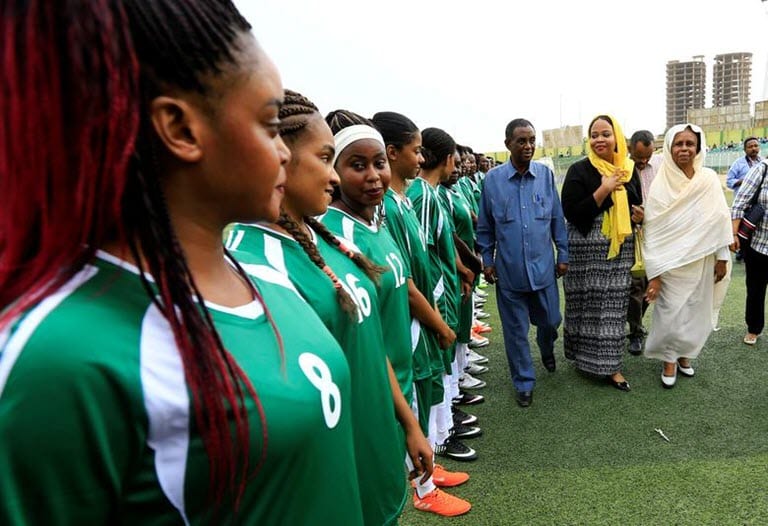 The South Sudan national women’s football team will feature in the CECAFA Senior Women’s Challenge Cup in Dar es Salaam in what will be their first ever appearance at a major tournament.

Francis Amin the president of South Sudan’s football federation has confirmed the Bright Stars participation through the federation’s website.

“The South Sudan Football Association (SSFA) has confirmed that they will for the first time enter a team in the 2019 CECAFA Senior Women’s Challenge Cup,” the statement said.

South Sudan has been pooled in group A alongside defending champions Tanzania, Burundi and Zanzibar.

Meanwhile the gifted dribbler and dependable midfielder Amy Lasu who captains Kenyan side Makolanders Ladies FC in the womens top league has been called to the South Sudan’s team.

The Council for East and Central Africa Football Associations (Cecafa) will wind up the 2019 season with three activities.

The CECAFA Senior Women’s Challenge cup tournament will be held from 14 November to 23 November.

The two other CECAFA tournaments; Senior men challenge Cup and CECAFA U-17 women tourney will be held in Uganda between 1st to 19th December 2019.

The flagship Cecafa Senior Challenge Cup will be making a return to Uganda after a seven-year hiatus.

The championship failed to take place last year due to lack of funds and was last held in 2017 in Kenya with hosts Harambee Stars beating Zanzibar Heroes 3-2 on post-match penalties in the final after a 2-2 in the extra time.

Eleven member states confirmed their participation in the oldest tournament in the continent, which is slated for December 1-19 in Kampala. They include hosts and record winners Uganda (14 titles), champions Kenya, Tanzania, Burundi, Somali, Djibouti, Zanzibar, Eritrea, Sudan, South Sudan and Ethiopia.

The Cecafa Secretary General Nicholas Musonye said three unnamed guest teams are still on stand-by for the men’s tournament that will run concurrently with the Fifa-funded U17 Women Challenge Cup in Uganda.