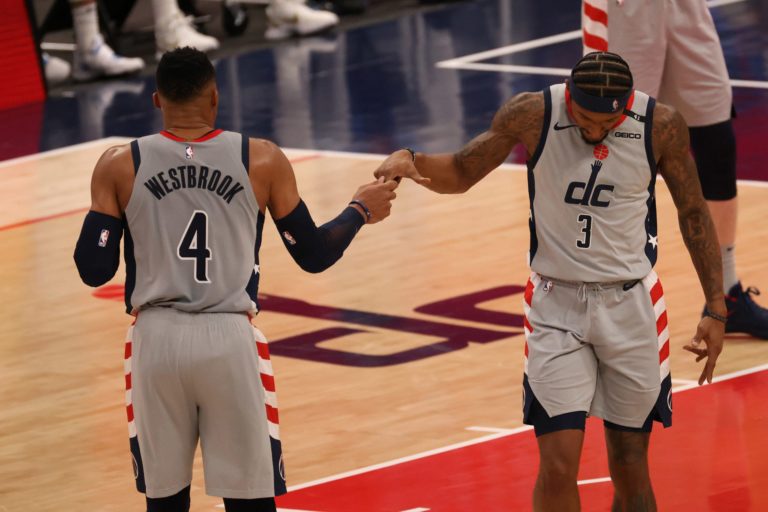 Russell Westbrook hit a go-ahead 3-pointer with 4.3 seconds remaining as the host Washington Wizards posted an unlikely 149-146 victory over the Brooklyn Nets on Sunday night.

Washington’s only lead was briefly in the second quarter before the frenetic final seconds that saw them score eight unanswered points in the final 8.1 seconds. Bradley Beal’s deep 3-pointer got the Wizards within 146-144, then Garrison Matthews intercepted a rushed inbounds pass by Joe Harris intended for Kevin Durant with 6.8 seconds left. He quickly dished to Westbrook, who sank a 3-pointer over Kyrie Irving with 4.3 seconds remaining.

Durant scored 37 and Harris added a career-high 30 for the Nets, who saw a four-game winning streak stopped and played without James Harden (left thigh contusion). Irving added 26 and Jeff Green contributed a season-best 23 for Brooklyn, which shot 56.8 percent and led by 18 late in the first quarter.

Will Barton scored 18 points and Jamal Murray added 16 for the Nuggets. Denver snapped Utah’s 11-game winning streak after shooting 54 percent from the field and making 18 of 28 3-pointers (64.3 percent).

Bojan Bogdanovic scored 29 points to lead the Jazz. Utah had seven players score in double figures but could not keep up with the Nuggets’ blazing shooting in the end.

For the first time this season, Philadelphia found a path to victory without Joel Embiid by defeating host Indiana behind a dominant fourth quarter in Indianapolis.

Tobias Harris finished with 27 points and eight rebounds to help the Sixers erase a 20-point second-half deficit and win their third straight. The Sixers outscored the Pacers, who dropped their second consecutive game, 37-15 in the fourth quarter. Philadelphia had gone 0-4 in games where Embiid didn’t play.

Malcolm Brogdon led the Pacers with 25 points on 10-for-21 shooting and Damontas Sabonis totaled 21 points, eight rebounds and three assists. Doug McDermott (lower back) did not start, but returned to the Pacers’ rotation and finished with eight points and five rebounds in 21 minutes.

Kawhi Leonard scored a game-high 28 points for visiting Los Angeles, who fended off a fourth-quarter rally by New York and pulled away for the win.

Reggie Jackson had 18 points for the Clippers, who put six players into double figures as they won for the 10th time in 11 games. Paul George scored 17 points, Serge Ibaka added 15 points while Patrick Patterson had 13 points and Marcus Morris Sr. contributed 11 points off the bench.

Julius Randle had 27 points and 12 rebounds for the Knicks, who have lost four of five. Immanuel Quickley had another big game off the bench with 25 points, including 11 in the fourth quarter. RJ Barrett scored 23 points and Elfrid Payton finished with 10 points.

It was the third straight loss for the Magic, who have won twice in their past 13 games. Cole Anthony had 16 points and Nikola Vucevic had 15 points and 14 rebounds for the Magic. Aaron Gordon had 14 points before leaving the game with a left-ankle sprain with 1:14 to play in the third quarter and did not return.

Malik Beasley and rookie Anthony Edwards scored 23 points apiece to propel Minnesota to a victory over visiting Cleveland in Minneapolis.

Beasley and Edwards combined to make 18 of 32 shots from the floor and D’Angelo Russell added 19 points for the Timberwolves, who posted just their third win in their last 17 games. Jaylen Nowell had a career-high 13 points off the bench, marking his third straight double-digit scoring performance.

Andre Drummond collected 25 points and 22 rebounds and Darius Garland had 17 points for the Cavaliers, who went 4 of 16 from 3-point range en route to losing for the fourth time in their last five games. Cleveland’s road woes continued, as it fell to 3-7 away from home.