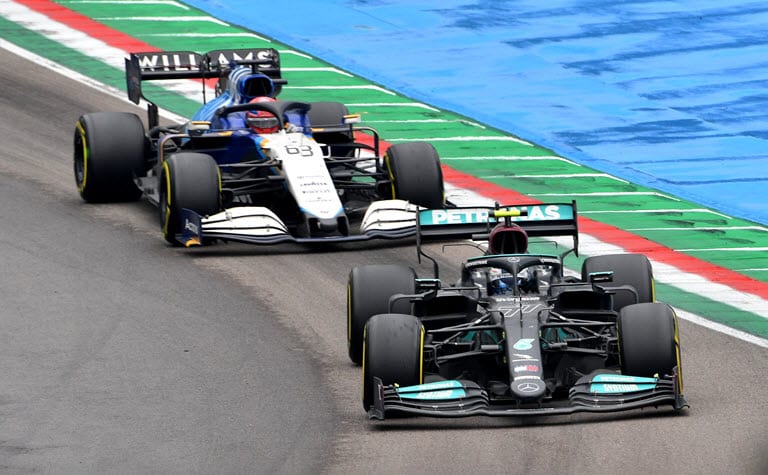 Russell said he “takes responsibility” for the risk he took in trying to pass the Finn’s Mercedes not paying off.

And he added that his emotions “got the better of me” after the incident.

Russell went over to Bottas and swore at him after their crash and brushed his helmet with his hand.

The pair collided after Russell lost control on a damp part of the track trying to pass Bottas for ninth place.

Stewards decided that neither driver was predominantly to blame in the incident and took no disciplinary action.

After the race, Russell accused Bottas of lacking respect for the dangers of Formula 1, and said he had questioned whether Bottas would have defended differently if he had been racing another driver.

Russell out-performed Bottas when he made a one-off substitute appearance for Lewis Hamilton in last year’s Sakhir Grand Prix in Bahrain after the seven-time champion contracted Covid-19, and the two are contenders for Mercedes seats in 2022.

Russell said in a statement on social media that Sunday “wasn’t my proudest day”.

He added: “I knew it would be one of our best opportunities to score points this season and, when those points matter as much as they do to us right now, sometimes you take risks.

“It didn’t pay off and I have to take responsibility for that.

“Having had time to reflect on what happened afterwards, I know I should have handled the whole situation better.

“Emotions can run high in the heat of the moment and yesterday mine got the better of me.

“I’ve learned some tough lessons this weekend and will come out of this a better driver and a better person for the experience.”

Russell is a Mercedes-contracted driver and the German company’s F1 boss Toto Wolff made it clear after the race that Russell should have taken into account who he was racing.

Wolff has since spoken to Russell about the incident.

“There is never a situation in life where one is responsible and the other zero,” Wolff said. “The whole situation should have never happened. Valtteri had a bad first 30 laps and shouldn’t have been there but George should never have launched into this manoeuvre considering the track was drying up.

“It meant taking risks and the other car is a Mercedes in front of him. In any driver’s development, for a young driver, you must never lose this global perspective, and so lots to learn for him, I guess.”

Wolff rejected the claim that Bottas had reacted differently because of the context of him fighting Russell.

He added: “The whole situation is not amusing for us, to be honest. It’s quite a big shunt. Our car is not going to be a total write-off but almost, in a cost-cap environment. That is certainly not what we need and is probably going to limit upgrades we are able to do.

“You need to see there is a Mercedes and it is wet. It bears a certain risk to overtake and the odds are against him anyway when the track is drying up.