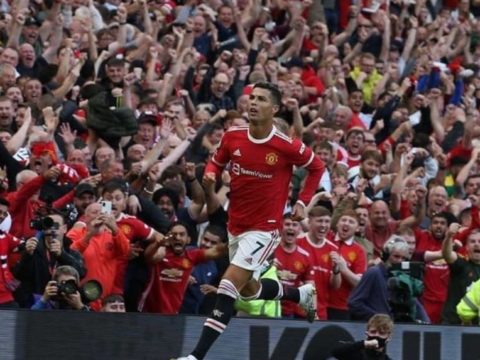 Cristiano Ronaldo scored twice on his return to Manchester United as the hosts eventually cruised to  a 4-1victory against Newcastle to send Old Trafford into raptures.

Cheered from the moment he left the team coach on its arrival at the ground, throughout the warm-up and then once the game had started, Ronaldo repaid the backing in the best possible manner.

Twelve years after he last scored for Manchester United in this stadium, Ronaldo broke the deadlock in first-half added time when he tapped in after visiting keeper Freddie Woodman spilled Mason Greenwood’s shot.

Then, after former Liverpool defender Javier Manquillo had levelled with his first Newcastle goal, Ronaldo finished off a flowing move by racing onto Luke Shaw’s through ball and drilling a low shot through Woodman’s legs.

His international team-mate Bruno Fernandes then rifled in the goal of the game as he collected Paul Pogba’s square pass and curled a shot into the top corner from the edge of the area. Substitute Jesse Lingard added a fourth in added time.

The margin of victory was harsh on Steve Bruce’s men, who played well for long periods. But that didn’t matter to the home fans, who had the added bonus of their side returning to the top of the Premier League.

You only had to look in the directors’ box to understand this was a special day for the hosts.

Another legendary former Manchester United forward, Ryan Giggs, was there. So too executive vice-chairman Ed Woodward, who has not been seen since the Super League debacle and co-chairman Avram Glazer, who was making his first Old Trafford visit in two years.

Glazer and Woodward both played central roles in Ronaldo’s return to the club from Juventus.

However, arguably Sir Alex Ferguson was even more significant, ringing the Portuguese to implore him to return to the club where he is still feted as a hero, rather than accept an offer from Manchester City.

His return has not been greeted warmly by everyone though, with a banner flown over Old Trafford by feminist group Level Up, who wanted to remind people about the allegations against Ronaldo.

On the pitch, though, Ronaldo proved he still has so much to offer at the age of 36.

His opener showed the value of anticipation, as he followed Greenwood’s shot in when the Newcastle defenders stood back.

The second emphasised Ronaldo retains enough speed to cause panic for defences as he charged clear to take his overall United tally to 120.

There was, however, to be no repeat of the hat-trick Ronaldo scored on his last appearance against Newcastle at Old Trafford in January 2008.

Nevertheless, with Fernandes delivering the kind of goal that has earned him hero status at the club and Lingard finishing matters off after opting to stay at United rather than return to West Ham, it was a victory that went beyond the contribution of a single individual – even if Ronaldo’s name will dominate the aftermath.