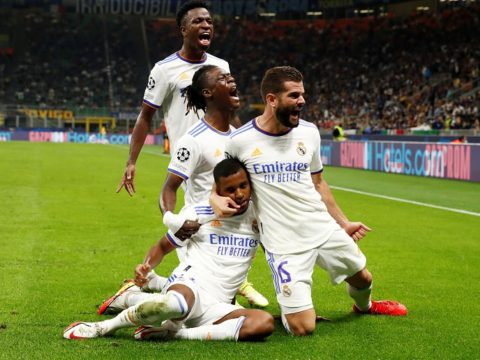 Real Madrid might have missed out on signing Kylian Mbappe but their youngsters have started the season by showing coach Carlo Ancelotti they can fill any perceived void.

All three are pushing to start Sunday’s tricky trip to unbeaten Valencia in LaLiga, where they will face their sternest test yet in front of a hostile crowd full of renewed hope under new coach Jose Bordalas.

“We’ve got some really strong youngsters with a lot of quality,” Ancelotti said.

“We also need to balance that with experienced players, which is normal and important for them, but we’ve got really good young players and the future is bright.”

Ancelotti will be without injured quartet Toni Kroos, Marcelo, Gareth Bale and Dani Ceballos for match against Valencia, who sit level with them at the top of the standings on 10 points, having hit seven goals in their last two games.

Champions Atletico Madrid, who are also on 10 points, travel to Athletic Bilbao on Saturday.

Diego Simeone’s men have been struggling for goals this term and the Argentine will be hoping returning forward Antoine Griezmann can find his feet sooner rather than later.

The weekend’s action finishes when an injury-ravaged Barcelona host Granada on Monday.

The Catalans, reeling from a 3-0 hammering by Bayern Munich in the Champions League, will be without Ousmane Dembele, Martin Braithwaite, Pedri, Jordi Alba, Sergio Aguero and Ansu Fati for the match.