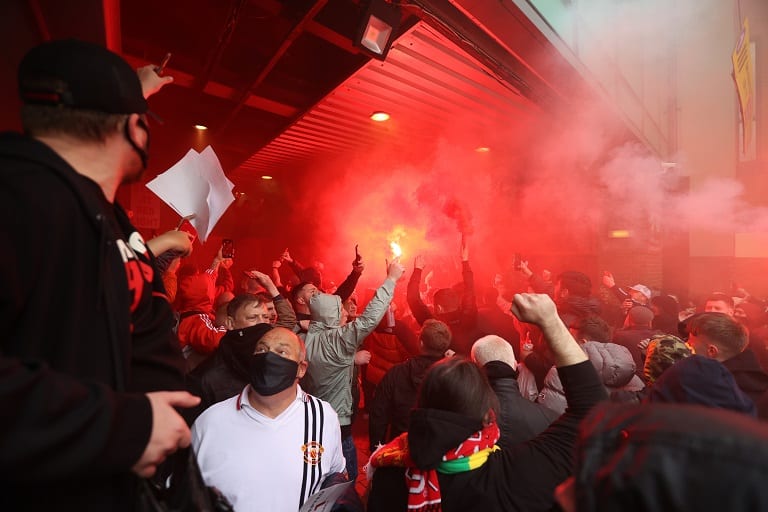 Manchester United fans protesting against the Glazer family’s ownership of the club stormed into their Old Trafford stadium and gathered on the pitch ahead of Sunday’s Premier League game against Liverpool.

British media reported fans turned up at Old Trafford at 1 p.m. local time (1200 GMT) to protest against the owners with banners and flares.

They pushed down the barriers to force their way into the ground ahead of one of the biggest domestic games of the season, which is scheduled to kick off at 4.30 p.m. local time.

Some fans even climbed onto the goalposts before they were removed from the pitch after about 10 minutes.

The Premier League has issued team sheets an hour before the scheduled kick off as planned – even as players are yet to arrive at the stadium.
Super League

United owner Joel Glazer, who was named the European Super League vice-chairman when the announcement was made, has apologised to the fans in an open letter after they withdrew from the project.

However, that apology seems to have been rejected by the club’s supporter base who protested outside Old Trafford last week, which followed demonstrations at United’s training ground.

The invasion of the pitch followed a protest outside the Lowry Hotel, where the United squad traditionally spend the night before any home match in preparation for games.

Heading into the weekend, United manager Ole Gunnar Solskjaer had backed fans’ right to protest but urged them to do it peacefully.

“It’s important that the fans’ views are listened to and that we communicate better,” Solskjaer told reporters. “I’ve been backed and had great support from the club and the owners and I’m sure I’ll get the backing again to go one step further.”

United was bought by the American Glazer family for 790 million pounds ($1.1 billion) in 2005. Although it has been listed on the New York Stock Exchange since 2012, the Glazers retain majority ownership.