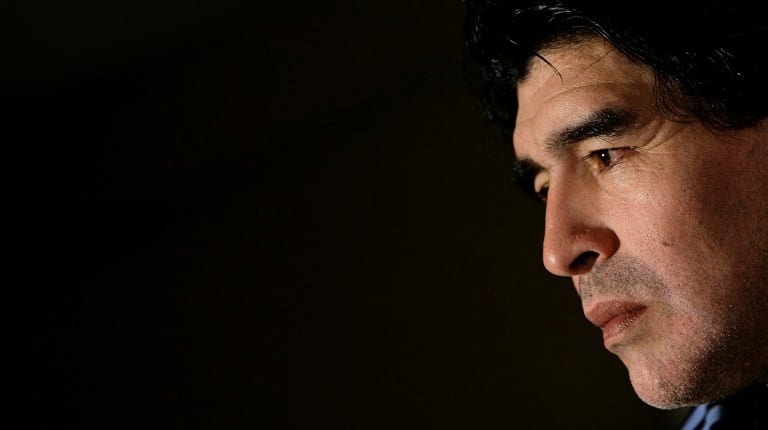 World soccer great Diego Armando Maradona, who died on Wednesday less than a month after his 60th birthday, was worshipped like a god for his genius with the ball, but his demons almost destroyed him.

Maradona had died after suffering a heart attack at his home in the suburbs of Buenos Aires, those close to him confirmed.

Rising to stardom from a grimy Buenos Aires slum to lead Argentina to World Cup victory, Maradona was a rags-to-riches story in his soccer-mad homeland and gained the iconic status of fellow Argentines Che Guevara and Evita Peron.

One of the most gifted soccer players in history, Maradona’s pinnacle of glory came when he captained Argentina to win the World Cup in 1986 before plunging to misery when he was kicked out the 1994 World Cup for doping.

Years of drug use, overeating and alcoholism truncated a stellar career and altered his appearance from the lithe athlete who could slalom effortlessly through teams to a bloated addict who nearly died of cocaine-induced heart failure in 2000.

But he reinvented himself in a stunning comeback in 2008 as coach of the Argentina team, persuading managers that with sheer charisma he could inspire the team to victory, despite a lack of coaching experience.

A magician with the ball – deceptively quick and a visionary passer – Maradona is considered by some as the greatest soccer player ever, edging out that other great, Brazil’s Pele. In Argentina, he was worshipped as ‘El Dios’ – The God – partly a play on words on his number 10 shirt, ‘El Diez.’

He was largely responsible for Argentina’s World Cup victory in 1986 in Mexico, scoring two famous goals in one game against England in the quarter-finals.

The first was a notorious goal scored with his fist, and the second, where he dribbled past half the England team, is often called the goal of the century.

“It was partly by the hand of God and partly with the head of Maradona,” he said of his opener in the 2-1 win.

On the Ball from Start to Finish 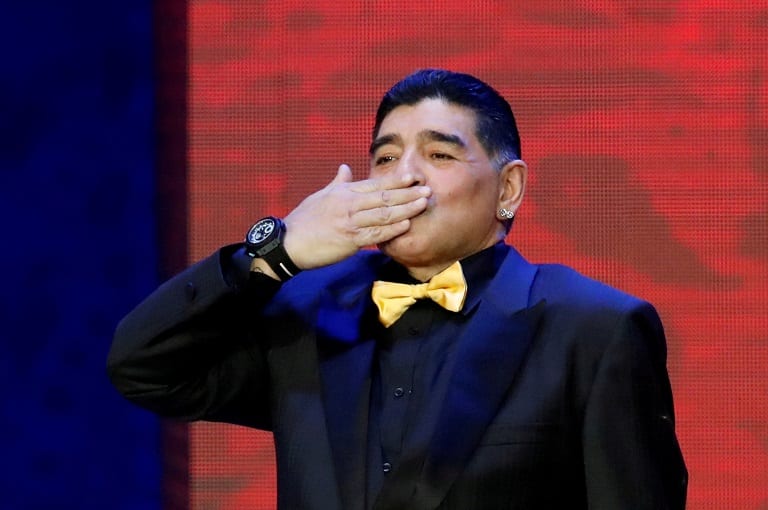 Born on October 30, 1960 in the Buenos Aires working class suburb of Lanus, the fifth of eight children of a factory worker, Maradona grew up in the Villa Fiorito shanty town.

His mother Dalma, known to his fans as “Dona Tota,” saw a star reflected on the floor in the church where her son was baptized and imagined a bright future as an accountant.

But Maradona’s love affair with soccer was apparent from the start. Given his first football as an infant, he slept with it under his arm.

Discovered in street kickabouts by the scout for first division club Argentinos Juniors, the prodigy made his league debut at 15.

At 17 he just missed inclusion in Argentina’s 1978 World Cup-winning squad at home. In the 1982 tournament in Spain, a sending-off against Brazil was a fitting prologue to two unhappy seasons at Barcelona, marred by hepatitis and injury.

But then came liberation, and triumph. In 1984, he moved to Napoli for a then world-record $7.5 million contract. Maradona helped underdogs Napoli to the Italian title twice – creating a whole new set of adoring fans in the process.

And, after the 1986 World Cup triumph in Mexico, he also coaxed a mediocre Argentine team to a second successive World Cup final in Rome in 1990.

But by 1991, drugs and alcohol began taking over his life.

That year Maradona was handed a 15-month suspension from football worldwide for doping and was called to trial in Naples over alleged links with a vice ring.

He was banned again for 15 months after testing positive for drugs at the 1994 World Cup in the United States.

The compact, 5-foot 4-inch (1.65m) player with dark curly hair and a pugnacious set to his jaw surrounded himself with an entourage of yes-men and became known for his sharp-tongued confrontations with reporters and critics.

Through the years he reflected publicly on his greatness and on his weaknesses, publishing books of photos and quotes about himself and hosting a television show.

“Soccer is the most beautiful and healthy sport in the world. Soccer shouldn’t have to pay for my mistakes. It’s not the ball’s fault,” he said. 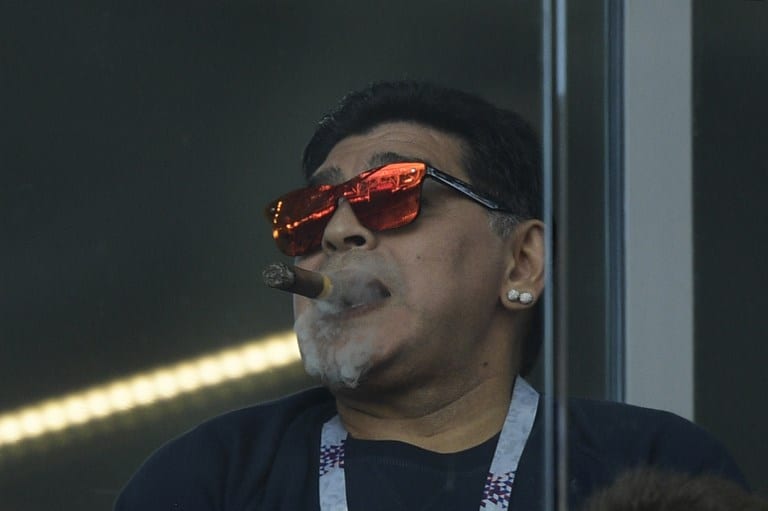 Maradona retired from professional soccer in 1997 and after his brush with death in 2000 he underwent drug rehabilitation, living off-and-on in Cuba between 2000 and 2005, where he often spent time with Fidel Castro. He had a tattoo of the Cuban leader on his leg – and one of fellow revolutionary Che on his arm.

For many, his off-pitch sins overshadowed his genius.

“My main doubt is whether he has the sufficient greatness as a person to justify being honored by a worldwide audience,” Pele said after a popular vote gave Maradona the FIFA century award in 2000, leaving Pele in second place.

Argentine media obsessed over Maradona’s addictive personality, with blanket coverage of his 2005 gastric bypass operation to lose weight and his 2007 hospitalization for life-threatening alcohol-induced hepatitis.

Drug and alcohol experts called Maradona’s abuse of one substance after another a slow-motion suicide.

But Maradona cleaned up and bounced back. In 2008 he talked himself into a position as the coach of Argentina’s national team.

Many Argentines doubted he could get a talented squad of players to act as a coherent unit, and they seemed justified when the team barely squeaked through the qualifiers for the 2010 World Cup in South Africa, finally crashing out in the quarter-finals.

Spells coaching in the United Arab Emirates were followed by a stint in charge of Mexican second division club Dorados de Sinaloa, before returning to Argentina to take over Gimnasia y Esgrima in La Plata in 2019.

All the while, Maradona was never far from the front pages.

During a rest cure in Italy, tax police confiscated his trademark diamond earring to help pay back taxes. In 2010 he was rushed to a hospital in the middle of the night for reconstructive surgery after one of his own dogs bit his lip.

With his knees causing him increasing pain and his weight fluctuating, his mobility was hampered and his famous speed long gone.

But fans remained devoted. From China to Europe, Argentines found they could make friends just by mentioning Maradona’s name.

Some created the Maradoniana Church, complete with its own religious imagery and 10 Commandments, one of which is, ‘Make Diego your middle name and name your first son Diego.’

Maradona was an antidote to upheaval for Argentina as it suffered successive economic crises and humiliating defeat to England after the 1982 conflict over the Falklands, or Malvinas Islands.

And he was balm for the wounded soul of Argentines, obsessed with their country’s perpetual failure to live up to its potential on the world stage.

“In our collective imagination Diego Maradona represents a certain glorious past, he’s a symbol of what we might have been,” popular culture professor at Buenos Aires University and Maradona expert Pablo Alabarces has said.