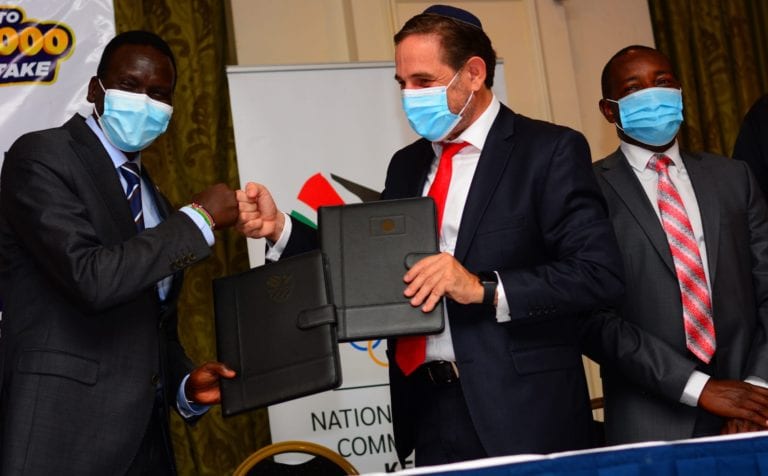 The National Olympic Committee of Kenya (Nock) has signed a five-year partnership deal with lottery firm Kenya Charity Sweepstake (KCS) in what is a massive boost ahead of the Tokyo Olympics.

In the partnership, Nock will receive 10 percent of the net games revenues from KCS until 2024.

NOC-K Secretary General Francis Mutuku hailed the partnership as a huge milestone in their bid to raise their kitty for their preparations.

“We really appreciate the support we have received from Kenya Charity Sweepstake as we step up our preparation towards the Tokyo Games. We want to urge Kenyans to also participate in the lottery since whenever they play they support their team,” said Mutuku.

While rallying for more support from Kenyans, Mutuku explained that the deal is not only geared towards Tokyo but also the 2024 Games in Paris.

“This is a long term partnership we are entering and our goal is to start preparing our young athletes for the future Games starting with Paris 2024. So far we have not hit our target and we may need more well wishers to support our course,” he said.

KCS CEO Yaron Farachi said the company is proud to support Kenyan stars to prepare adequately for the Games.

“We have been supporting sports for the past 50 years and we saw it was a huge responsibility to come on board and be part of this journey towards the Olympics Games.  We know the Games are drawing closer and we need our athletes to be in good shape to win medals and all that needs funds as well,” said Farachi.

With barely six months to the start of the global extravaganza, 86 Kenyan athletes have already sealed their slots with the committee targeting a contingent of at least 100 athletes.

At the same time, NOCK President Paul Tergat is optimistic that the postponed Olympics will proceed despite the resurgence of the corona virus in Tokyo.

According to media reports in the Japanese capital, the majority of the residents are against the country hosting the delayed Games.

“The postponed Olympics will take place and I can assure you that we are looking forward to it.  I know you may have seen a lot of talk from various media outlets but that won’t distract our focus as Team Kenya. We are raring to go,” said Tergat.

Others were track athletes Mary Moraa and Benjamin Kigen, Jeffrey Oluoch of Kenya Sevens team as well as Faith Ogolla who has qualified for Tokyo Games in Taekwondo.