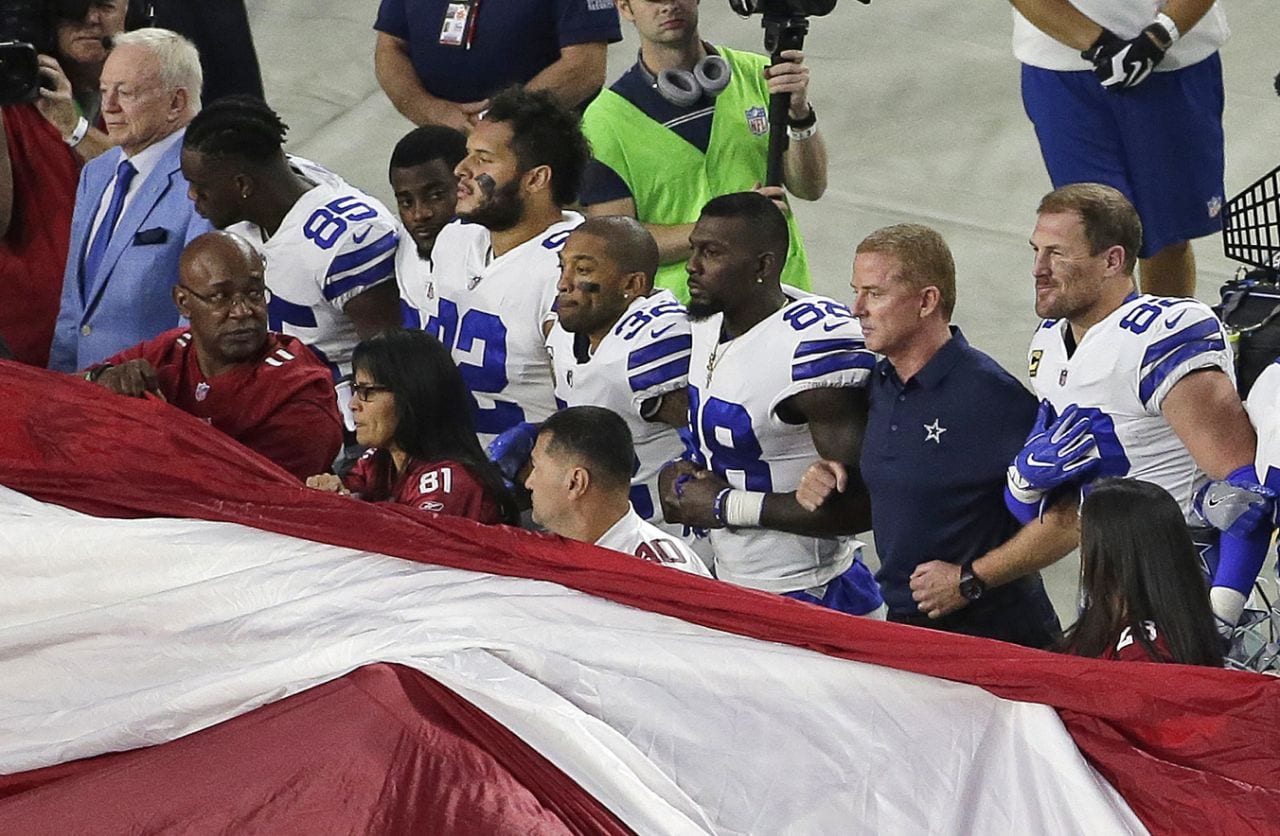 Trump’s tweet came a day after Goodell said in a memo to all 32 NFL teams that the league believes everyone “should” stand for the traditional pre-game playing of “The Star-Spangled Banner.”

“It is about time that Roger Goodell of the NFL is finally demanding that all players STAND for our great National Anthem-RESPECT OUR COUNTRY,” Trump tweeted.

Trump reignited the issue last month by saying players who refused to stand for the traditional pre-game anthem should be fired and calling any such player a “son of a bitch.”

The move by Trump, who had been reluctant to condemn white supremacy groups following a deadly rally in Charlottesville last month, did not sit well with NFL players, most of whom are African-American. Many more have kneeled in recent weeks than had done before, while others locked arms in a show of unity, at times with team owners.

On Tuesday, Goodell attempted to end the controversy but stopped short of ordering or demanding players stand.

“Commentary this morning about the commissioner’s position on the anthem is not accurate,” the NFL said in a statement.

“As we said yesterday, there will be a discussion of these issues at the owners meeting next week. The NFL is doing the hard work of trying to move from protest to progress, working to bring people together.

“Commissioner Goodell spent yesterday with Miami Dolphins players, law enforcement and community leaders witnessing first-hand the outstanding work our players and clubs are doing to strengthen their communities. Players from around the league will be in New York next week to meet with owners to continue our work together.”

The kneel protest movement began last year when Colin Kaepernick, then a quarterback for the San Francisco 49ers but now unsigned by any NFL club, said it was aimed at raising awareness of police brutality, social injustice and racial inequality issues in the wake of several police shootings across the United States of African-American men.

Trump has characterized the anthem kneeling as unpatriotic, an insult to the American flag and to soldiers who fought for the freedom it represents, including the free speech right to protest being used by players.

Goodell hoped to calm matters in his memo: “Like many of our fans, we believe that everyone should stand for the national anthem. It is an important moment in our game. We want to honor our flag and our country, and our fans expect that of us.

“We also care deeply about our players and respect their opinions and concerns about critical social issues.

“The controversy over the anthem is a barrier to having honest conversations and making real progress on the underlying issues. We need to move past this controversy, and we want to do that together with our players.”

League owners meet next week in New York and the issue should be a major part of their agenda.

Goodell said he wants a plan that “would include such elements as an in-season platform to promote the work of our players on these core issues, and that will help to promote positive change in our country.”

To that end, he has invited NFL Players Association Executive Director DeMaurice Smith and players union leaders and they will also attend the meetings, according to a union statement saying Goodell reached out Wednesday to Smith.

“There has been no change in the current policy regarding the anthem,” the NFLPA statement said. “The agenda will be a continuation of how to make progress on the important social issues that players have vocalized.

“Everyone who is part of our NFL community has a tremendous respect for our country, our flag, our anthem and our military and we are coming together to deal with these issues in a civil and constructive way.”