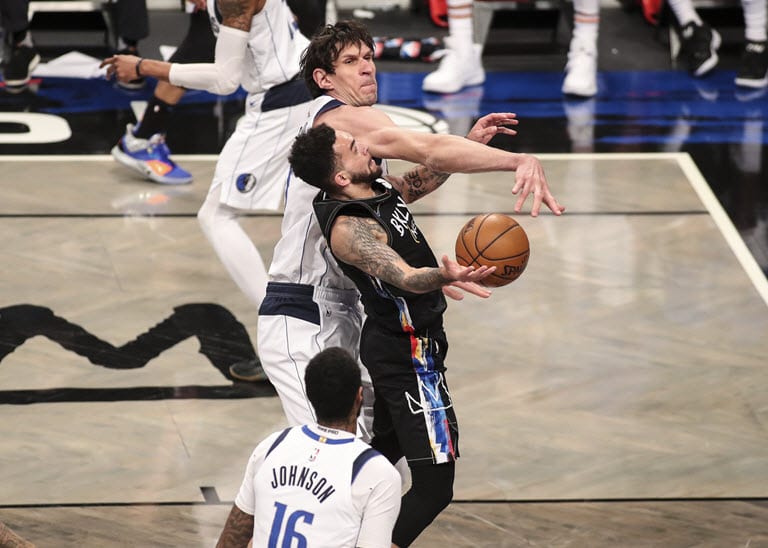 Luka Doncic scored 27 points and the visiting Dallas Mavericks pulled away in the second half for a 115-98 victory on Saturday night over the Brooklyn Nets, who saw their season-high winning streak snapped at eight games.

The Mavericks won for the eighth time in 11 games and bounced back nicely from Thursday’s 111-97 loss in Philadelphia. Dallas held Brooklyn to 34 points after halftime.

Doncic shot 11 of 21 from the floor, added seven assists and six rebounds and had plenty of help. Kristaps Porzingis returned from missing three games with a back injury and added 18 points.

Beal finished with a game-high 34 points while Westbrook recorded a second straight triple-double with 19 points, a game-high 14 rebounds and a game-high 12 assists as the Wizards won for the seventh time in their last eight games.

Karl-Anthony Towns had a team-high 23 points, with 11 rebounds and a team-high five assists to lead Minnesota, which lost its seventh straight.

Donovan Mitchell led seven Utah players in double figures with 31 points as the visiting Jazz bounced back after a rare loss to beat Orlando.

LaMarcus Aldridge added 21 points off the bench for San Antonio, which has won three of its past four games and won its first game since it had four games postponed because of COVID. Dejounte Murray scored 18, Lonnie Walker IV had 17, and Patty Mills added 13 for the Spurs.

Isaac Okoro had 15 points and eight rebounds, Jarrett Allen contributed 14 points and 10 rebounds and Damyean Dotson had 10 points for the Cavaliers, who only had nine players available.

Julius Randle collected 28 points and 10 rebounds to lift host New York over Indiana for its sixth win in eight games.

RJ Barrett scored 24 points and Derrick Rose had 17 points and a season-high 11 assists for the Knicks, who overcame an early 16-point deficit to snap a four-game home losing skid to Indiana.

Doug McDermott scored 20 points and T.J. McConnell added 17 points and 12 assists for the Pacers, who have lost eight of their last 11 games. McConnell drew his second start of the season in place of Malcolm Brogdon, who missed his first game of the campaign due to a sore right knee.

Nikola Jokic had 19 points, 11 rebounds and 13 assists to lead Denver to a blowout of host Oklahoma City.

Jamal Murray led the Nuggets with 26 points, going 9 of 15 from the field.

Denver poured it on from the start and didn’t look back, scoring the game’s first 13 points en route to sweeping the season series. The Nuggets led by as many as 23 points in the first quarter and were up 38-20 by the end of the quarter.