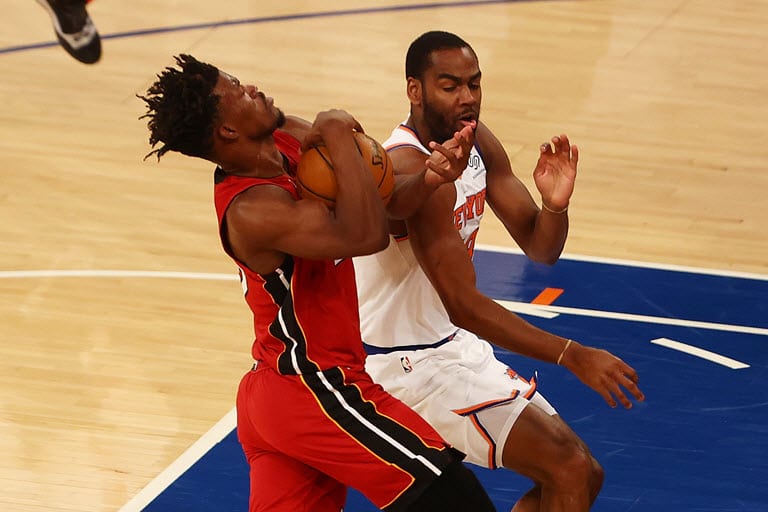 Jimmy Butler scored eight points in the fourth quarter and hit the tie-breaking jumper with 4:18 left Sunday afternoon as the visiting Miami Heat held off the New York Knicks in a 109-103 win.

Butler (17 points, 10 rebounds and nine assists) just missed a triple-double while Bam Adebayo (24 points and 11 rebounds) also had a double-double for the Heat, which has won two straight for just the second time this season. Kendrick Nunn and Tyler Herro each scored 16 points while Kelly Olynyk (15 points) and Duncan Robinson (12 points) each got into double digits.

Julius Randle had 26 points and 13 rebounds for the Knicks, whose two-game winning streak was snapped. Reggie Bullock hit seven 3-pointers on his way to 21 points while Alec Burks had 13 points off the bench.

Bullock drained a trio of 3-pointers as the Knicks opened the game on a 15-5 run. The Heat responded with a 16-3 run — Bullock hit another 3-pointer for New York’s only points — in which Nunn hit two 3-pointers, including the tie-breaking trey that gave Miami a 21-18 lead.

Rozier finished with 26 points, four assists and three rebounds and Hayward totaled 25 points, five rebounds, three assists and two steals as Charlotte bounced back emphatically after consecutive losses to the Sixers and Jazz at home earlier in the week.

Bradley Beal returned to form scoring a game-high 31 points for the Wizards a game after his dismal seven-point outing on Friday against the Miami Heat when he shot 1-for-14 from the field. Beal, who didn’t make his first shot against Miami until the third quarter, hit his first shot in the opening minute and went 11-for-22 from the field and 3-for-9 from 3-point range.

Donovan Mitchell flirted with his first triple-double, scoring 27 points with 11 assists and nine rebounds to lead visiting Utah over Indiana.

Domantas Sabonis totaled 20 points and nine rebounds to lead Indiana before fouling out. Doug McDermott added 18 points and Malcolm Brogdon netted 15 for the Pacers, who have dropped five of their last six games.

Jayson Tatum had a game-high 23 points for Boston, which was without injured starters Jaylen Brown and Marcus Smart.

De’Aaron Fox scored 10 points of his 36 points in the final 5:16 to help visiting Sacramento hold off Los Angeles.

Buddy Hield added 22 points and nine rebounds for the Kings, who have won seven of their past eight games.