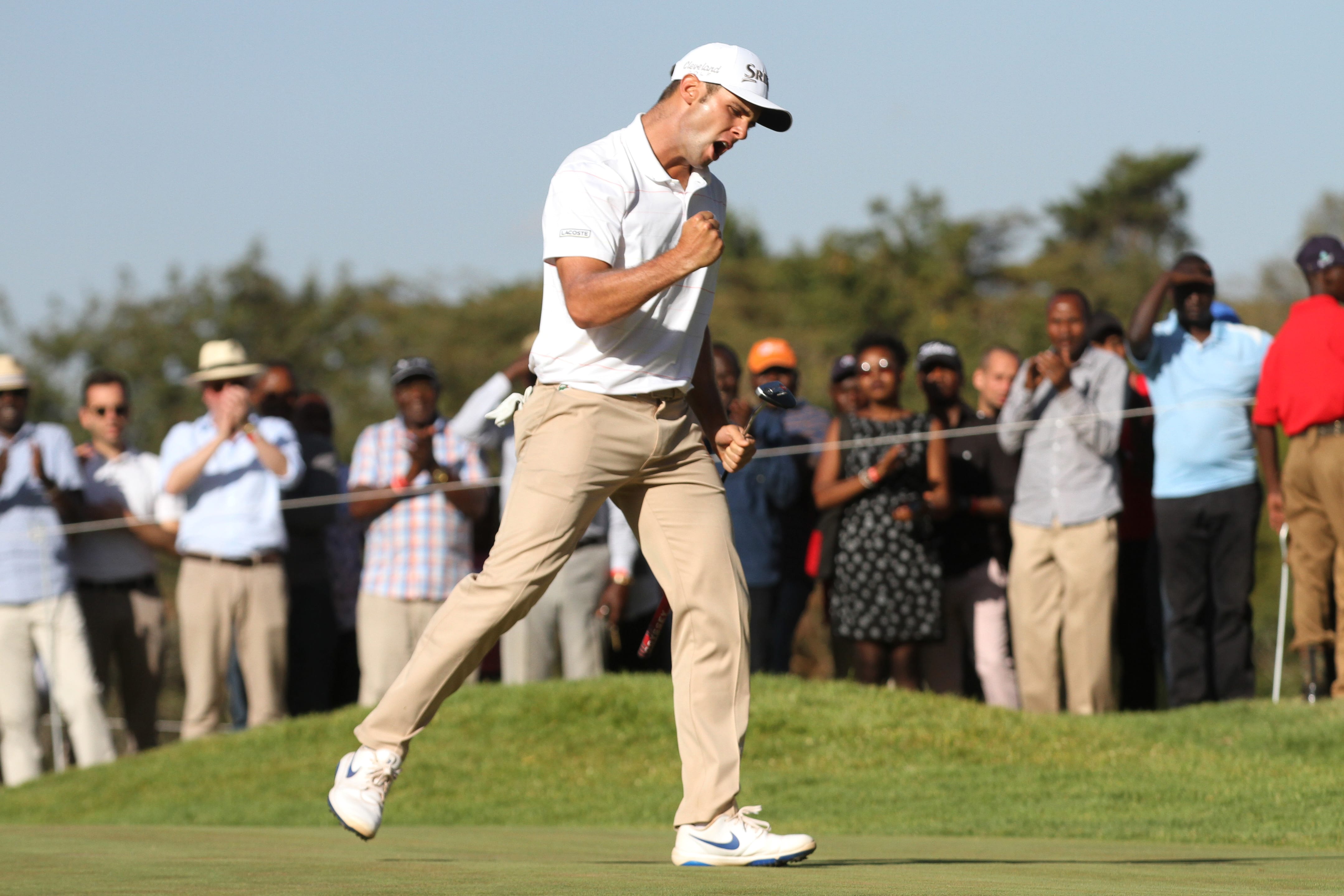 Italy’s Guido Miglozzi and Spain’s Adri Arnaus, played rounds of 7-under par and 6-under par respectively, to charge to the top of the leader board after round three action at the Karen Country Club, for a total score of 14-under par, 199 apiece.

The duo, who were playing partners in game 39, started the day four and five shots behind overnight leader Louis De Jagger. They went on to take full advantage of   De Jagger’s slip-up, to post the two best scores of the round and of their European tour careers, for a share of the lead heading to the final round of action.

Miglozzi was the first to make a move on the leader, after holing a birdie on the par-3, second to make the most of De Jagger’s bogey on the first. The Italian followed this up with a hat trick of birdies, from the 5th to 7th holes for a front nine score of 31. On his part, De Jagger was doing just enough to hold on to the lead this far, with a par score of 35 after his first nine holes.

This, while Arnaus had gone one better with five birdies through the same holes, for a first nine score of 30 to make for a captivating race to the finish, with a three way tie.

The South African would fade away in the last five holes, dropping three shots at the 13th, 15th and 16th coupled with birdies on the 14th and 18th, while holding par at the 17th to relinquish the lead with a total round score of 1-under par, to take his overall tally to 13-under par, 200.

The Italian would however drop a shot at the 18th to take his round’s score to 7-under par, 64, with Arnaus hitting birdie for a round’s score of 6-under par 65, to see the two share of the lead on 14-under par, after three rounds.

Speaking after his round Adrian Arnaus, expressed his delight with his performance especially in the front nine, while hoping to maintain the same in the last round.

“I would have loved to have been here after my front nine yesterday – that’s what I was playing for. I am happy that I was able to turn it around and it has been a lot of fun so far, and hopefully it will continue to be tomorrow.” He said.

“Yesterday over the front nine I didn’t quite feel as good as I was having thoughts about my swing, but after that it all seemed to click and I have been able to implement new swing thoughts over and over since.” He added.

Speaking on his preparations for the final round, he said:

“I have been in this position before, and I think that everything in the past is going to help me – all I have to do is try and play good golf again tomorrow.”

On his part Arnaus lauded his solid performance in the round, mentioning that his work on the greens was finally paying off.

“I played very solid out there today. My putting was really good, I have been working at that a lot on the greens over the past few days, and I saw a lot of good results from that today.”

On his plans for the final round, he added, “I am confident with my game, and I am hoping that my best game – like I played today – will be enough tomorrow.”

A second CUT was applied at 3-over par, 216 after the round, to see the initial field of 79 trimmed to 72 and ties, for the last round to be played tomorrow at the same venue. Among those who missed the cut to play in the final round include Spain’s Borja Virto, Welshman Oliver Farr.

Round four action tees off at 7:11am, with Chilean duo of Nico Geyger and Hugo Leon getting things underway, the leading group of Adri Arnaus and Guido Miglozzi will tee off at 12:50pm, from the first tee.