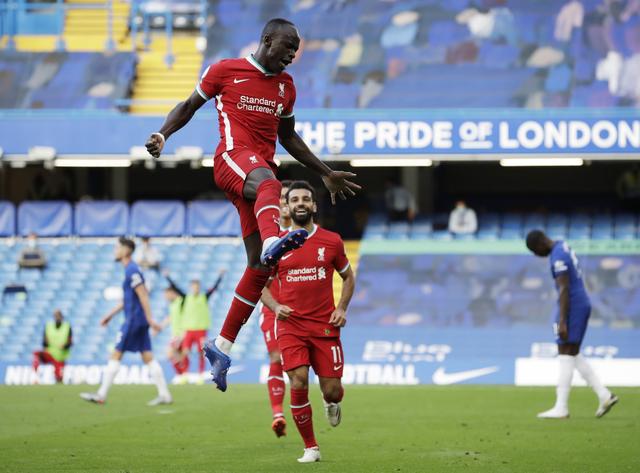 Two goals from Sadio Mane just after halftime eased champions Liverpool to a 2-0 win over 10-man Chelsea in the Premier League season’s first heavyweight clash at Stamford Bridge on Sunday.

A dull game never threatened to live up to the eight-goal thriller when the sides met in July, and it proved all-too-easy for Liverpool to lay down an early marker although Chelsea were architects of their own downfall.

Chelsea managed only one goal attempt in the first half but were solid enough until Danish defender Andreas Christensen was sent off shortly before the interval for hauling down Mane.

Mane headed Liverpool in front five minutes after the interval and four minutes later took advantage of a dreadful error by Chelsea keeper Kepa Arrizabalaga as the hosts crumbled.

Liverpool gave new midfield signing Thiago Alcantara a debut off the bench but the Spaniard’s first impact was to offer Chelsea a lifeline by fouling Timo Werner to concede a penalty with a little under 20 minutes remaining.

But Jorginho’s effort was saved by the otherwise redundant Alisson Becker to spare Liverpool any late tension.

Liverpool have won both their opening games but trail cross-city rivals Everton at the top on goal difference.

Frank Lampard’s Chelsea, who finished 33 points behind Liverpool in fourth place last season, have three points and many improvements to make if they are to close that gap.

One of them could spell the end of the road for keeper Arrizabalaga who continues to look anything but a player who cost the club an eye-watering 80 million euros ($95 million) when he joined from Athletic Bilbao in 2018.

Chelsea, who splashed out massively on boosting their attacking threat with the likes of Timo Werner and Kai Havertz, looked ponderous in defence and will be anxious to get further new signings Thiago Silva and Ben Chilwell involved quickly.

Liverpool, on the other hand, have slipped impressively into the groove and their new signing Thiago, despite his one slip, looked classy in his brief cameo appearance.

There was little in the way of goalmouth action in the first half although Liverpool enjoyed the lion’s share of possession.

Arrizabalaga had one nervy moment when he was caught way out of position after sprinting out to intercept a ball but his blushes were spared by Christensen’s block.

Everything changed when Christensen was caught out by Mane’s run on to Jordan Henderson’s pass and opted for a rugby tackle.

The Dane initially got a yellow card but referee Paul Tierney upgraded it to red after checking a pitch-side monitor.

Liverpool pressed the throttle after halftime.

Roberto Firmino played a one-two with Mohamed Salah before chipping a perfect cross for Mane to head powerfully past Arrizabalaga in the 50th minute.

Then came Arrizabalaga’s howler. His lazy pass to Kurt Zouma was easily intercepted by Mane who had the simplest of tasks to roll the ball home. Mane could also have bagged a hat-trick but his deflected effort late on was well-saved by Arrizabalaga.

“A keeper needs confidence, it was a clear mistake, he has accepted that but we have to have joint responsibility, these things do happen,” Lampard, who thought his side’s display was better than in the win over Brighton last week, said.

“The red card changes the face of the game.”