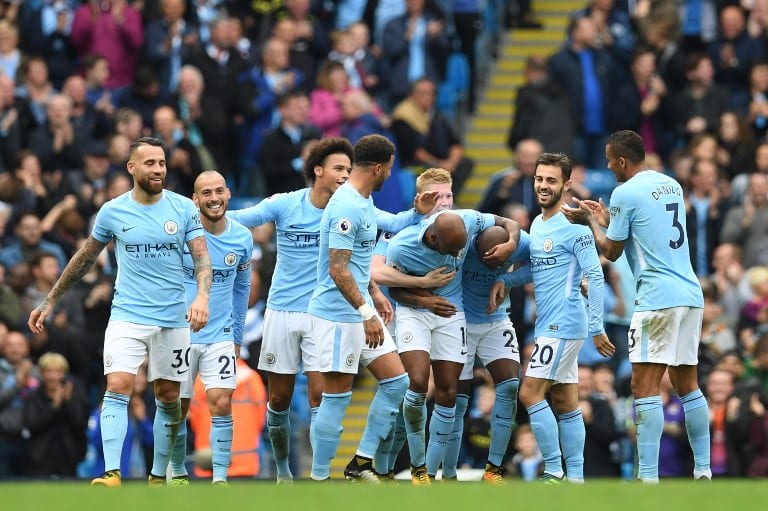 Raheem Sterling shone for Manchester City and Romelu Lukaku delivered for Manchester United as the Manchester clubs maintained a tight grip on the Premier League title race with Saturday victories.

Sterling scored a brace as City crushed bottom club Crystal Palace 5-0 and are top on goal difference above United, who won 1-0 at Southampton courtesy of Lukaku’s first-half goal.

Champions Chelsea and Tottenham Hotspur kept pace with the top two, putting the pressure on Liverpool, who visit Leicester City later on Saturday, and Arsenal, who host West Bromwich Albion on Monday.

Palace have now lost their first six games of the season after crashing to a heavy defeat at the Etihad Stadium in Roy Hodgson’s second league game as manager.

City suffered an early blow when left-back Benjamin Mendy was forced off after hurting his knee in a collision with Andros Townsend, with Danilo taking his place.

Pep Guardiola’s side went in front shortly before half-time when Leroy Sane converted after a one-two with David Silva.

Sterling’s quick-fire double took the game beyond Palace, the England forward tapping in passes from Sane and Sergio Aguero in the 51st and 59th minutes.

Aguero made it 4-0, heading in Sane’s cross to close to within one goal of Eric Brook’s all-time City record of 177 goals, before Fabian Delph curled in a fine fifth.

City have scored 16 goals in their last three league games, having previously trounced Liverpool 5-0 and won 6-0 at Watford.

United had a rather less straightforward afternoon at Southampton, but they prevailed thanks to Lukaku’s sixth goal of the campaign.

The Belgium international struck in the 20th minute, scoring at the second attempt after his header from Ashley Young’s in-swinging cross was saved by Fraser Forster.

United manager Jose Mourinho was sent to the stands in stoppage time after encroaching onto the pitch.

Chelsea remain three points off the pace in third place after Alvaro Morata scored a hat-trick in a 4-0 win at Stoke City.

The Spain striker struck three times at the bet365 Stadium, opening the scoring in the second minute, with Pedro also on target.

Harry Kane took his tally to six goals in four games as Tottenham Hotspur won 3-2 at West Ham United to claim a third successive away win.

Kane’s first-half brace and a Christian Eriksen effort put Spurs 3-0 up before Serge Aurier was sent off and West Ham came back into the game through Javier Hernandez and Cheikhou Kouyate.

“We suffered a little bit, but I like it when you suffer, because it means you are alive,” said Spurs manager Mauricio Pochettino.

“Overall I think we deserved to win and the good thing is we can compete.”

Second-half substitute Oumar Niasse netted twice as Everton snapped a run of three successive defeats by coming from behind to win 2-1 at home to Bournemouth, who had gone ahead through Josh King.

There was little to write home about at Turf Moor as Burnley and Huddersfield Town played out a goalless draw.