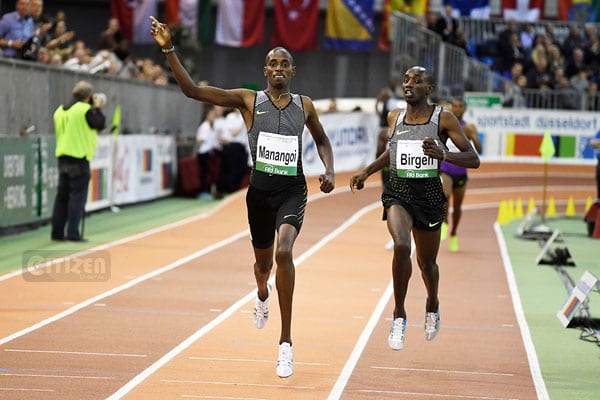 World Championships men 1500 metres silver medallist Elijah Manangoi led a Kenyan podium sweep in his speciality at the 2017 International PSD Bank Dusseldorf Indoor Meeting in Germany on Wednesday night. Manangoi stopped the clock at three minutes, 37.62 seconds to lead Bethwell Birgen and 2010 Commonwealth champion Silas Kiplagat across the line at the IAAF World Indoor Tour event to launch his season in emphatic fashion. Hillary Cheruiyot clinched the second victory for Kenya on the night when he ran seven minutes, 44.73 seconds for victory in the men 3000 metres race as Ethiopian Dawit Wolde and Soufiane Elbakkali settled for second and third. Polish European champion Adam Kszczot forced Nicholas Kiplangat of Kenya to accept second place when he edged the men 800m showdown in one minute, 46.89 seconds. After Boston’s mile on Saturday, Dusseldorf featured the men’s 1500m as a World Indoor Tour event and it was Kenya versus the rest of the world. A lead pack of five quickly established with Germany’s Homiyu Tesfaye the only non-Kenyan in the mix. With one lap to go, Birgen and world silver medallist Manangoi who was defending his crown dropped the rest of the field. In the end, Manangoi had just enough energy in reserve to out-sprint his compatriot over the final metres and take the win in a world-leading 3:37.62. Birgen finished in 3:37.81. “Good start 2017……The journey begins,” Manangoi posted on his Facebook wall following his triumph. It was a welcome return to form for Manangoi, a Presidential Escort Service police officer after he pulled out of the Rio 2016 Olympics men 1500m final with injury aggravated at the semi final. The men’s 3000m, a non-scoring event, saw Ngetich out-kick Ethiopia’s 2007 world U18 bronze medallist Dawit Wolde in a Personal Best of 7:44.73. Kszczot was introduced as ‘Mr PSD Bank Meeting’ to the sell-out crowd and once again proved why he deserves his title. The Pole stormed to a world-leading 1:46.17 in the men’s 800m to take his sixth victory in Dusseldorf. World indoor bronze medallist Erik Sowinski looked poised for second but was pipped on the line by Kenya’s Kipkoech, who clocked a lifetime best of 1:46.89. The Tour moves to neighbouring Karlsruhe on Thursday night as the athletes pursue more points. -Material from IAAF used in this report Men’s results 60 Metres – Men Final