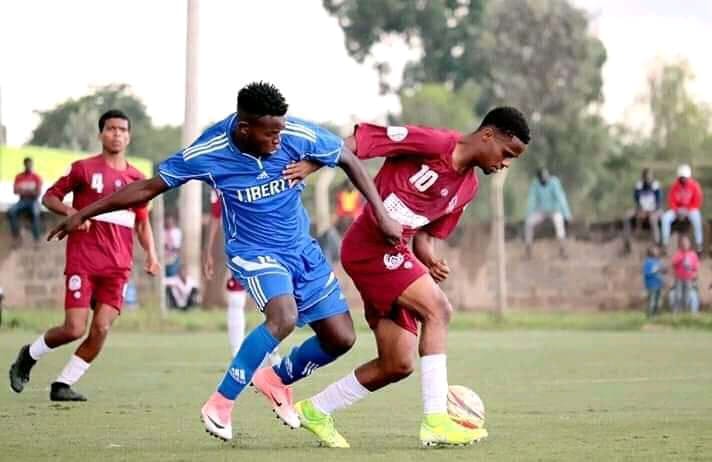 Had everything gone to plan, a young man by the name Mutuse Junior would by now be rubbing shoulders with one of the finest footballers of our time.

If not, he would at least be an understudy in a league with top facilities and solid football infrastructure, ready for a career takeoff.

But then came the monster. Covid-19. It has ravaged global economies. Turned everything upside down. Shutting global sports for a handsome six months plus.

To put this into perspective, there lay an opportunity. The beneficiary happened to be a 21-year old  Liberty Academy and former Harambee Stars Under-20 striker Mutuse Junior who had landed an opportunity to join Vissel Kobe, a Japanese top-tier league side, a team that boast in its ranks Spain football wizard and former Barcelona midfield maestro Andres Iniesta.

But Covid-19 made travel impossible as Kenya joined the rest of the world in shutting its airspace in a desperate bid to tame the spread of the flu-like virus.

Recollecting the events, Mutuse told Citizen Digital in an exclusive interview that though he regrets the turn of events, his spirit is unbowed, confident that the deal will still see the light of the day.

Should that turn out to be the case, he would ply his trade in the same league as Kenya’s lead striker Michael Olunga who is having a field day in the J-1 League, scoring at will for Keshiwa Reysol, while Iniesta would be his team mate.

By the time the FKF Division One 2020 season was halted by the coronavirus pandemic, Mutuse had scored seven goals after 13 rounds, while the season before, he emerged second in the division’s scoring charts after finding the net 17 times .

He has also featured for Yulu Nunguni FC, before moving to Murangá Seal FC and finally Liberty.

The budding goal-poacher landed the Japanese deal early this year following his heroics in the third tier league and was scheduled to leave the country on March 28 to finalise his deal with Vissel Kobe, but as the fate would have it, Kenya banned all the international flights on March 25 to curb the spread of the virus.

However, with international flights ban now lifted, Mutuse believes his agent together with Vissel Kobe FC management will fast-track his move to Japan.

“Everything was set for me to sign with Vissel Kobe and were it not for the virus, I would have left in March and by now I believe I would be playing alongside Iniesta(Andres) whom we all adore. I was looking forward to scaling my career to the next level but I will be patient and God-willing, I will make it once the coronavirus dust settles.”

He went on: “I was to sign a five-year deal with  the paper work almost done but I hope the club management together with my agent are working round the clock to ensure the deal doesn’t go up in smoke.”

“Ghost convinced me to join Liberty from Murangá Seal last year, immediately after we played against the former and after impressing him together with Kimanzi they embarked on a mission, to find me a club in Japan because they believed I deserved professional football. They sent out my videos to Vissel Kobe and fortunately the club’s management was impressed and a deal was reached.

He added: “Kimanzi was the first to spot my talent when he was invited as a guest during a local football tournament which was organised by Kitui East MP, Nimrod Mbai in 2013.  At the time I was only 13 years old. He then took me to JMJ Soccer Academy in Nairobi and that’s where I started to build my football career.”

Mutuse says he is looking up to Kashiwa Reysol forward Michael Olunga who is turning heads in the J. League this season and who has also risen through the Liberty Academy ranks to become one of the most lethal strikers in Japan today.