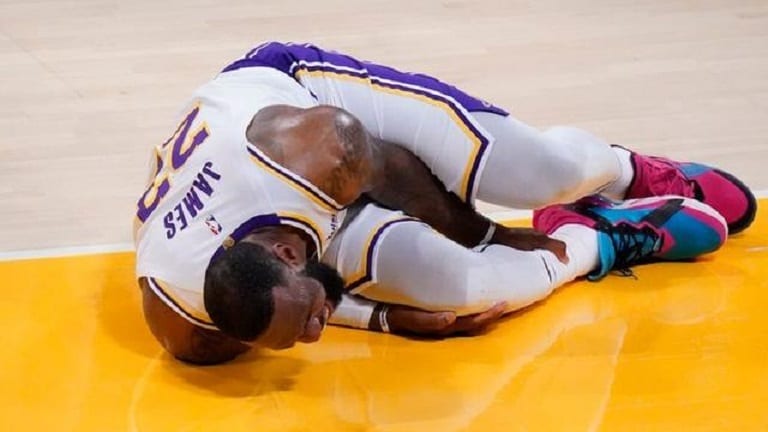 ESPN reported that James has a high ankle sprain and is out indefinitely. A Lakers sideline reporter confirmed the report.

The four-time NBA Most Valuable Player left the contest and postgame X-rays were negative. The team was waiting on MRI exam results, according to multiple reports.

Hawks forward Solomon Hill rolled into James’ right ankle while chasing after a loose ball with 10:50 remaining in the second quarter. James let out a scream in frustration as he grimaced while rolling around on the floor.

“I haven’t necessarily seen him scream and squall like that, probably ever, not even with that groin,” Lakers forward Kyle Kuzma said, referencing an injury James sustained two seasons ago. “It had to hurt a little bit, for sure.”

James, 36, was attended to by the team’s training staff before returning to his feet. He stayed in the game and drained a 3-pointer to give him 10 points, extending his NBA-record run of double-digit scoring to 1,036 consecutive games.

But James soon called a timeout, left the floor and headed for the locker room. He knocked down a chair on the way. Fellow co-captain Anthony Davis went back to the locker room to check on James.

Coach Frank Vogel was tight-lipped about the situation following the game.

“The mood of the team is we’re disappointed we lost, and we’ve got to come back and get one (Sunday),” Vogel said, looking toward a game against the host Phoenix Suns. “I won’t disclose what LeBron was like (in the locker room). It’s in-house.”

James has missed just one game this season, a 123-120 loss to the Sacramento Kings on March 3 in the final game prior to the All-Star break. He sat out due to a lingering, mild left ankle sprain.