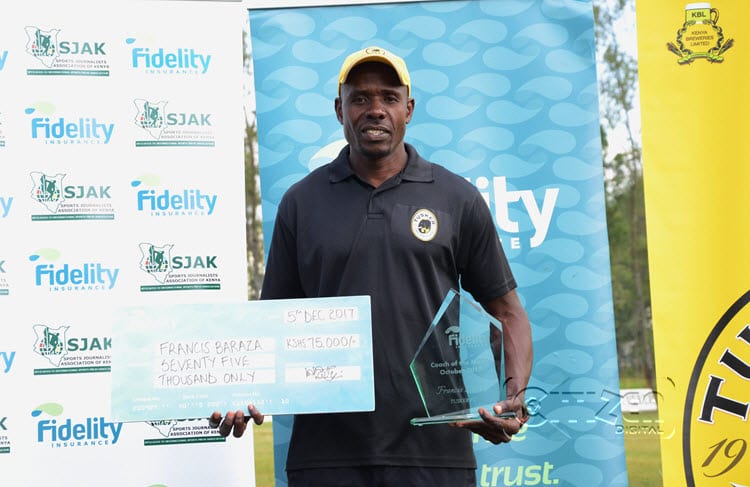 Tusker’s interim coach Francis Baraza has smacked all to claim the October Fidelity Insurance Coach of the Month.

The award is a boost to his credentials as he bids to land the Tusker job on permanent basis after holding brief after the firing his former boss, Ugandan George’Best’ Nsimbe.

Baraza laid claim to the award through a scoreless draw at home to high flying newbies Kariobangi Sharks before going on a three-match winning run over Muhoroni Youth, Nakumatt FC and Posta Rangers.

With ten points in the bag, Baraza easily scooped the award as his contemporaries failed to muster as many points. For his sound tactics in October, Baraza was awarded Sh 75, 000 in addition to a personalized trophy.

The former Kenya international defender confounded many when he quit his head coach position at Chemelil Sugar to take up Tusker FC’s assistant coaching role at the end of 2016 season. His spell however, saw the team surrender league title to Gor Mahia, a precedent that culminated in Nsimbe’s ouster paving way for Baraza to reign in the last eight matches.

“I had a good time at Chemelil Sugar and we performed well as a team, finishing in the highest position ever since the club was promoted. So when many people thought and wanted me to stay, I saw fresh and bigger challenge at Tusker and that is why I decided to join the brewers albeit as an assistant coach,” he said in an interview shortly after claiming the honours on Monday.

“I had the chance to learn under a more experienced coach and even though things did not turn out so well for the team we managed to salvage what we could. Now the Tusker assignment is even bigger but I’m up to the task. I’m ready to give my best and this award goes along way in helping me say that. The team pulled together and thanks to the joint effort I have this award,” he added.

While at Chemelil, he had also been crowned the best coach in August 2016 and he joins Western Stima’s Henry Omino as the only tacticians to have won the Fidelity Insurance Coach of the Month award more than once since its inception at the beginning of 2016.

The Tusker FC management is yet to name Nsimbe’s successor and naturally as a former Number Two to the Ugandan and the current holder of the position, albeit in an acting capacity, Baraza is crossing fingers that luck may smile his way.