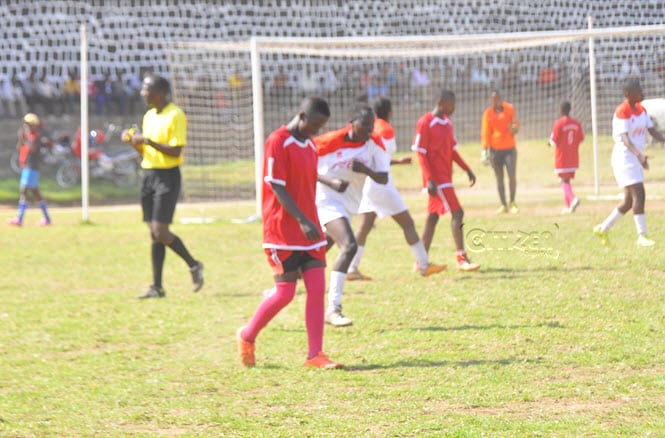 An inspired substitution from coach Mukasa Amboko paid dividends as Kenyan football champions Kwale Girls fought back to rescue a point in a 1-1 stalemate against hosts ES Shwemu at the Ubworoherane Stadium, Musanze -Rwanda.

Saumu Baya was sent on immediately after the restart with the team trailing 1-0 to provide more attacking width and had only been on the pitch 20 minutes when she scored a superb equalizer.

Kwale, who clinched their maiden national title after defeating Archbishop Njenga 4-1 in the final, went one goal down inside the opening 10 minutes thanks to Nadine Mukandayisenga’s free-kick.

Amboko’s charges struck the thrice before Baya, who scored twice in that demolition of Archbishop Njenga, hauled them back on level terms with a sweet dipping finish from outside the 18-yeard area.

“We were expecting three points but we conceded early. The team we played against was not very good but played a tactical match so it was difficult to penetrate them. We really fought; created enough chances but for that goal I’m thankful.

“In the first half we were observing and reading how the opponents play. We were also assessing our own mistakes leading to a tactical switch we made and as you saw it paid off. Baya really helped in creating spaces for the other forwards and scored a very wonderful goal. She has a very good left foot and I knew that is something I was lacking in the first half,” Amboko told Citizen Digital.

In Boys’ volleyball, debutants Kapkonyolei – who swept Ugandans Wagwa 3-0 in Monday’s opener – suffered a 3-0 (25-23, 25-23, 25-22) defeat to Rwandan champions College Christ Roi on the back of some defective serving.

Another Kenyan volleyball side Cheptil Girls also endured a bad day in office as they lost 3-0 to hosts GS Indangaburezi after opening their campaign with a straight sets win over compatriots Soweto on Monday.

Soweto recovered from that defeat to win 3-1 against Trust High of Uganda with Kenyan champions Kwanthanze continuing their remarkable form with a 3-1 victory over IPRC Kigali to make it two wins in two.

In Boys’ basketball, Sigalame High School went down 69-61 to Buddo SS of Uganda in a hot-tempered encounter that saw two opposing players ejected after a violent spat over a piece of foul play.