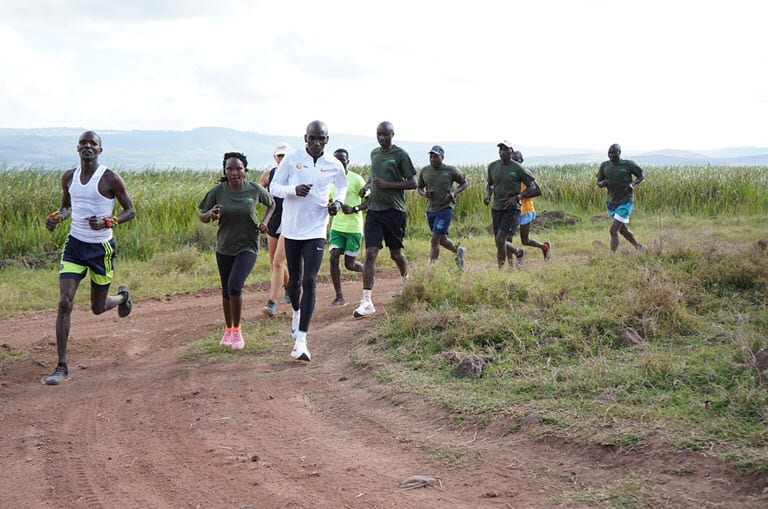 They were joined by Edward Ndiritu who is the Head of Anti-poaching at the Conservancy, among others.

After the run, Kipchoge took time to learn more about the impact that last year’s marathon had on the communities and wildlife surrounding the conservancy.

“Over the years, the marathon has proven to be a melting pot of hundreds of sporting enthusiasts drawn from all over the world. Since its inception, the race has raised approximately KES 800M in support of livelihood and conservation programmes in Lewa and across Kenya.

“From this invaluable support, the neighboring communities have benefited through programmes in education, healthcare, water, micro-enterprise, youth empowerment and more,” said Kipchoge.

For the second year running, the marathon will be held virtually with organisers encouraging runners everywhere to lace up their shoes and join the challenge in support of Kenyan communities and wildlife.

Runners can participate in the 5km, 10km, 21km or 42km categories. Participation is free, but all runners are encouraged to donate whatever they can.

“By coming together in partnership and as one global family, the communities that are supported by the marathon are able to derive their day-to-day livelihoods in ways that are compatible with thriving wildlife habitat,” said Watson.

Co-organised by Tusk Trust and Lewa and headline sponsored by telecommunication giants Safaricom and Huawei, the unique marathon has raised millions of shillings to fund wildlife conservation and community development in Kenya over the last 21 years.

The funds raised have been used in various initiatives and projects across Kenya; from recovering Kenya’s Black Rhino population from the brink of extinction, protecting the world’s critically endangered Grevy’s Zebra, providing healthcare, water and improved infrastructure for communities; to supporting Lewa’s education programmes.