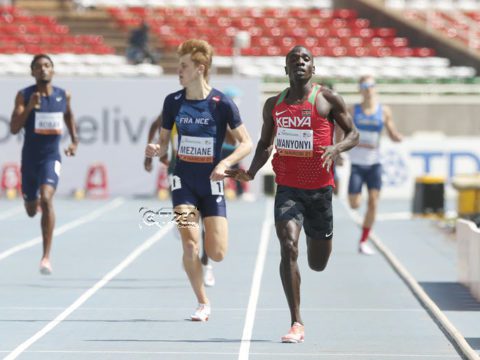 Noah Kibet and Emmanuel Wanyonyi put down markers in the men’s 800m after easing into the semis of the ongoing Nairobi World Under-20 Championships at Kasarani on Thursday.

Kibet led from gun to tape to win the first heat in 1:46.70 beating Jakub Davidk of Czech Republic who finished second and Heithem Chenitef of Algeria who placed third.

Wanyonyi stormed to a dominant victory in the third heat where he clocked 1:46.51 to also seal a slot in the semi finals set for Saturday.

Kibet said he is drawing inspiration from his compatriots, Emmanuel Korir and Ferguson Rotich, who won gold and silver respectively in the two-lap race during the recently concluded Tokyo Olympics.

“There was pressure before the start because some of my opponents had better timings than me and I’m happy I’ve qualified to the semis,” he said, adding; “Korir and Ferguson really motivated me after their performance in Japan and I’m ready to win gold also during this championship.

Many successful athletes have cut their teeth at the junior championship including world 800metres record holder David Rudisha who is among the ambassadors of this year’s event.

In the women’s contest, Kenya’s hope of bagging a medal in the women’s 800m went up in the smoke after Sheila Chepkosgei was disqualified while Brenda Chebet failed to qualify for the semi finals.

Chepkosgei took victory in the first heat after dominating the race from start to finish but was however disqualified for lane infringement.

Her compatriot, Chebet, placed seventh in the third heat after clocking 2:12.16 to miss out on the semi finals slated for Friday.

Meanwhile, Kenya’s Alocious Kipngetich and Peter Kithome made it to the semi finals in the men’s 400m hurdles after finishing in top four positions in their respective heats, as the World Under-20 Championships entered its second day at Kasarani Stadium.

Kipngetich placed third in the first heat clocking 51.41seconds while Kithome was second in the second heat when he clocked 51.31 seconds.

Speaking after sealing the semi final slot, Kithome who ran a personal best in the one-lap race, shifted his focus on the Saturday’s semis.

“I would’ve won my heat but I didn’t want to waste a lot of energy because there is a big task ahead. My preparations were good and besides winning I’m aiming to run below 49 seconds,” Kithome told Citizen Digital.

In the women’s race, Agnes Mutindi Ngumbi missed out after finishing fifth in her heat where she clocked a new personal best mark of one minute, 2.65 seconds.