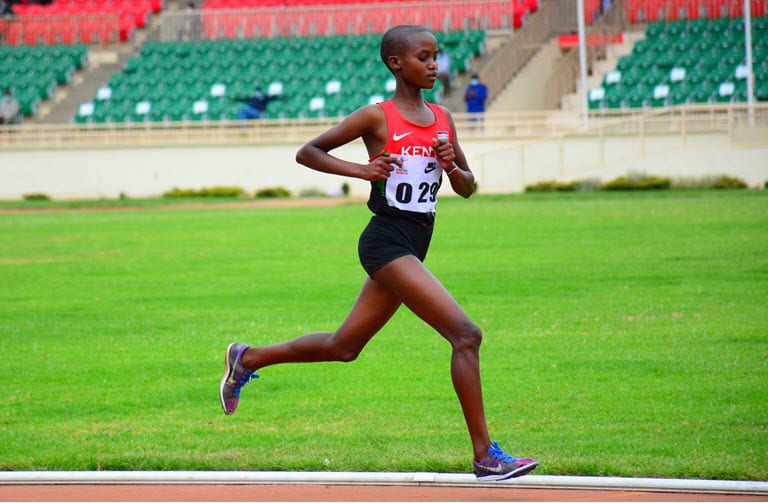 Vincent Keter secured an easy victory in 1500m as Athletics Kenya (AK) Nairobi region picked its team for the World Under-20 trials during a pre-trial event held Wednesday at the Nyayo Stadium.

Keter, who trains at Rongai Athletics Club, clocked 3:52.4 to edge his training partner Victor Mutai who finished second in 3:54.5 as Tenai Kipruto from Langata timed 3:56.3 to seal the podium.

The athlete said he was using the race in preparation for the Sollentuna Grand Prix, a World Continental Tour Bronze meeting set for Sunday in Stockholm where he will be chasing an Olympic qualifying mark of 3:35.0 ahead of next week’s trials.

“It was not that competitive but I was just using it as a warm up race as I will be travelling to Sweden tomorrow. My aim is to hit the Olympic qualifying standard,” said Keter.

It was a similar script in the girl’s 5000m as Fancy Cherono from Langata took a comfortable win after clocking 17:03.0 ahead of Ann Wanjira (17:51.4) and Sheila Cherop (18:58.7) who finished second and third respectively.

“I thank God for today’s victory, I promise to do even better at the national trials and make the cut in team Kenya,” said the standard seven pupil at Katet Primary School in Londiani, Kericho County.

Joyline Chepkemoi took the top honours in the girl’s 3000m after timing 9:38.4 as Jonathan Kipkoech from Rongai won the corresponding boy’s title in 8:06.0

Athletics Kenya Youth Development committee chairman Barnaba Korir disclosed that the athletes picked at the regional level will be placed in camps ahead of the main trials.

“We were planning to have all the athletes in camps but for those who won’t make it to the camps due to different reasons then the respective regions will continue monitoring their development. We have to keep them active ahead of the trials,” said Korir.

Nairobi is the fourth region to hold its pre-trials after Southern, Central Rift and South Rift.

Nyanza South is set to hold its pre-trials on Thursday at the Kisii University with the region’s coordinator for the event Haron Onchong’a expecting stiff competition.

“We are giving everybody an opportunity since we want to select a very strong team for the national trials next month,” said Onchong’a.

Central, North Rift, Eastern and Western regions are all set to pick their teams on Saturday.