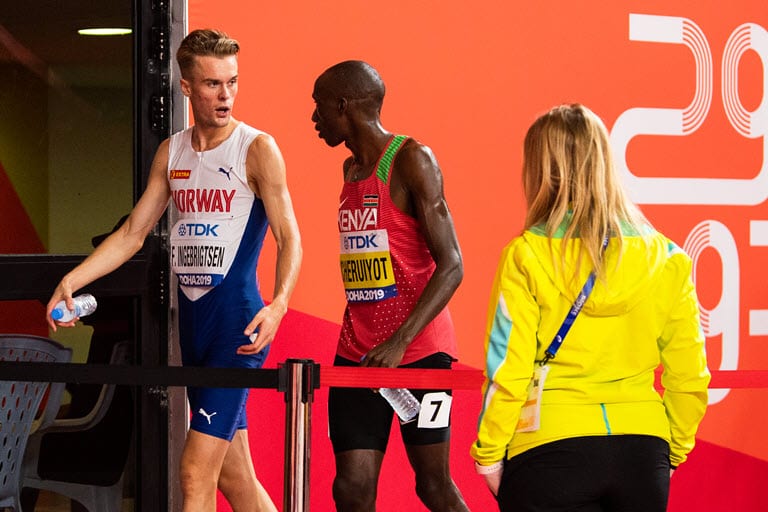 First on track will be the 1,500m men’s semi final where Timothy Cheruiyot and Ronald Kwemboi will be in search of a place in Sunday’s final.

The two were the only survivors from the hotly contested heats where youngster George manang’oi brother to the defending champion Elijah manangoi and Kumari Taki failed to qualify. The race will start today’s programme at 20:05hrs.

The four qualified with ease after a splendid performance on Day five at the semi finals, where Leonard Kipkemboi Bett was the first to make the final despite a third place finish in heat one in 8:13.07.

“The pace was too high and I experienced that people are being blocked when running from the inner lane so I want to try to run out in the final and take advantage of the sprint at the home stretch,” Bett told citizen digital.

Abraham Kibiwott was the second one to book a place in the final despite also finishing third in heat two in a time of 8:18.46, before a tantalizing third heat with favourites Benjamin Kigen and defending Champion Conseslus Kipruto.

Coming back from injury Kipruto had not won a race before the heats dropping out of two diamond league race’s; he however has a warning, to anyone who thinks he can be written off.

“They dominated when I was out with an injury, if we could have met at the heats that could have been different, I don’t fear competition; let’s meet in the final,” he said.

Kipruto clocked 8:19.20 to win heat three ahead of compatriot Benjamin Kigen who has better plans for the final.

“The final will be different we have been rivals all through the season at the diamond league, and everyone has his own plan for the final,” he said.

Also in the hunt for a medal is Africa 800m silver medallist Emmanuel Korir. After a semi final exit in the 800 meters, the American based athlete is ready to make amends.

From Khalifa stadium kenya’s hunt moves to the road, when African walk champion Samuel Gathimba takes on the world in search for his first worlds medal.

“it depends on how you wake up, you know how the heat is doing here, I wish I came a little bit late but its okey I’ll try my best.

Kenya is fourth with a total of four medals, two Gold medals and bronze.