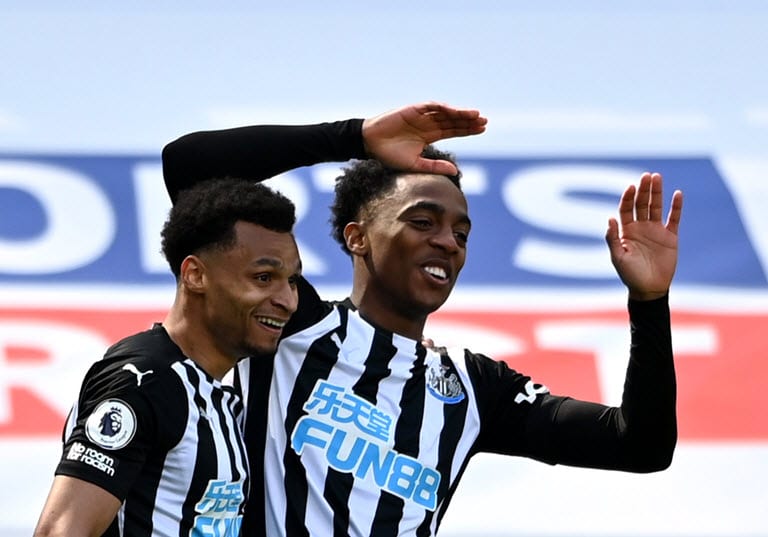 Issa Diop’s own goal and a Joelinton tap-in had put the hosts in a commanding position at the break.

However, West Ham, who had Craig Dawson sent off for two first-half bookings, drew level from a Diop header and a Jesse Lingard penalty that was awarded after a VAR review.

But with the visitors seemingly on top, Newcastle had the final say, substitute Joe Willock heading an important winning goal that lifts Steve Bruce’s side up to 15th in the table, with a nine-point cushion to the bottom three.

West Ham remain fourth but have now played a game more than fellow Champions League hopefuls Chelsea and Liverpool, who will have the opportunity to leapfrog the Hammers before they play again.

David Moyes’ side had arrived in the north-east of England looking for a third consecutive win but were ultimately punished for a sluggish first half in which they conceded twice and had Dawson sent off.

Prior to his dismissal Dawson’s heavy touch saw him clatter Joelinton, allowing the impressive Allan Saint-Maximin to race clear and fire in a shot that Hammers goalkeeper Lukasz Fabianski and defender Diop contrived to turn into their own goal.

Dawson, who had been booked earlier for a foul on Joelinton, received his second yellow card in the aftermath and was dismissed.

To compound matters Fabianski dropped a simple catch from a corner five minutes later to present Joelinton with a tap-in for Newcastle’s second.

However, the visitors improved after the break and were unfortunate not to claim a share of the spoils in a thrilling finale.

Steve Bruce has repeatedly claimed that Newcastle’s season may have been on a different trajectory if he had been able to field Miguel Almiron, Saint-Maximin and Callum Wilson on a regular basis.

And while Wilson started on the bench against the Hammers, Almiron and Saint-Maximin were both excellent as the hosts took control of the contest.

Saint-Maximin in particular provided the thrust to Newcastle’s early attacking play, beating opponents at will to create several excellent openings after cutting in from the left flank.

And it was entirely predictable that he would contribute as Newcastle made the breakthrough, accelerating away from Mark Noble, albeit benefiting from some calamitous play from Fabianski and Diop in the process.

Having just returned to full fitness Newcastle’s biggest concern will be that the Frenchman hobbled off after 64 minutes.

In his absence they retreated further and further into their own half, handing West Ham the ascendancy before securing back-to-back league wins for only the second time this season.