Isak shows Spain the value of a genuine number nine 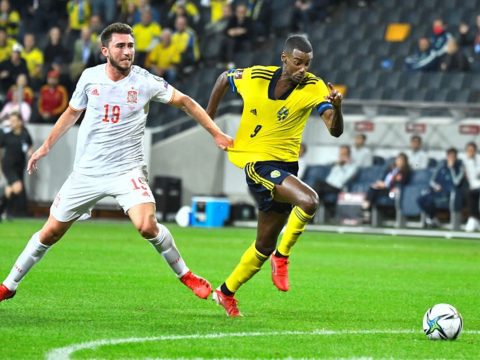 On a night that started so badly for Sweden, it did not take long for the value of having an out and out number nine in their team to become evident.

Just 62 seconds after conceding to Spain, Alexander Isak latched on to Sergio Busquets’s mistake to finish with aplomb and set Sweden on the way to a shock 2-1 victory in their World Cup qualifier.

Isak, who plays in Spain for Real Sociedad, was a thorn in the side of the Euro 2020 semi-finalist’s backline all night, running Eric Garcia and Aymeric Laporte ragged with his direct movement and deft touches.

He was helped by Spain coach Luis Enrique’s questionable decision to employ a high back line but Isak was in bullish mood after the match.

“We know that Spain are favourites (for the group), but we are also a good team,” Isak said.

“We said before the game we’re playing at home and we had to go for the three points.

“I think we got our defence right, as usual, and this time we were much better offensively.”

More than just setting the tone for his team’s high-octane display, Isak’s eye of the needle finish again highlighted just how much Spain need a proven goalscorer.

Gerard Moreno’s only contribution to the game was to trip over his own feet with the goal gaping at 1-1.

His strike partner Alvaro Morata, who has been heavily criticised by fans and pundits in Spain, was anonymous in his 75 minutes on the pitch as the duo were well shackled by Victor Lindelof and Filip Helander.

The visitors’ best chances came through wingers Ferran Torres and Adama Traore, both forcing Robin Olsen into saves – but there was nobody with a goalscorer’s instinct ready to tuck home the rebound.

With Sweden now top of Group B, it is a problem Luis Enrique must find a solution to urgently if Spain are to reel them in.