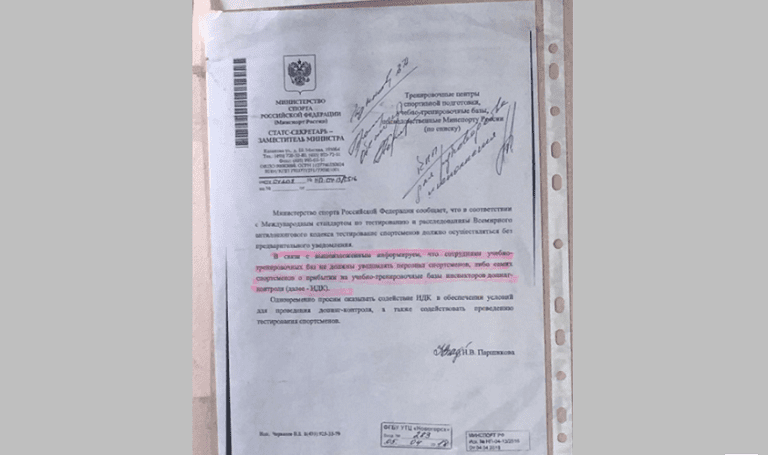 Russia’s sports ministry has sent an internal memo instructing staff of national training centres not to tip off athletes about doping tests, in what three leading international anti-doping specialists said was a rare Russian acknowledgement of methods used in the past to hide drug-taking.

As part of an investigation into alleged state-sponsored doping in Russian athletics, a commission set up by the World Anti-Doping Agency (WADA) found in 2015 that athletes were given advance notice of out-of-competition testing, which helped drug cheats evade detection.

Russia dismissed the WADA report as baseless, and it still rejects allegations it has covered up its athletes’ positive tests, including at the 2014 Sochi Winter Olympics, though it has acknowledged shortcomings in its anti-doping set-up.

The internal memo, seen by Reuters, was dated April 4, signed by Deputy Sports Minister Natalia Parshikova and was addressed to staff of national training centres where elite sportspeople train.

“The employees of training bases must not notify athletes’ staff or the athletes themselves of the arrival of doping control officers at the training bases,” the letter reads.

Richard McLaren, a Canadian lawyer who worked on the 2015 WADA report and other probes into alleged state-sponsored doping in Russia, said he and his colleagues had not come across such documents.

Asked about the memo, the sports ministry said it was “periodically reminding employees of these sports facilities to comply with the requirements of international anti-doping legislation” but would not say when it began sending such letters. The letter does not say it constitutes a reminder.

WADA founder Dick Pound, who chaired the commission that produced the 2015 report, told Reuters the fact the ministry had sent the letter “must necessarily reflect some knowledge on the part of the government that the offending conduct has continued, or it would not have been necessary to ‘remind’ anyone.”

While the ministry’s letter calls for better anti-doping practices, it “serves to reinforce the existence of a previous deliberate regime to undermine anti-doping and confound the sample collection process,” said Doug MacQuarrie, the chair of the Institute of National Anti-Doping Organisations (iNADO).

“It supports the theory that the rules were not respected when anti-doping control officers would arrive,” said Christiane Ayotte, head of Canada’s WADA-accredited laboratory.

The doping allegations have dealt a major blow to Russia’s standing in international sports and continue to shape its relations with global sports bodies.