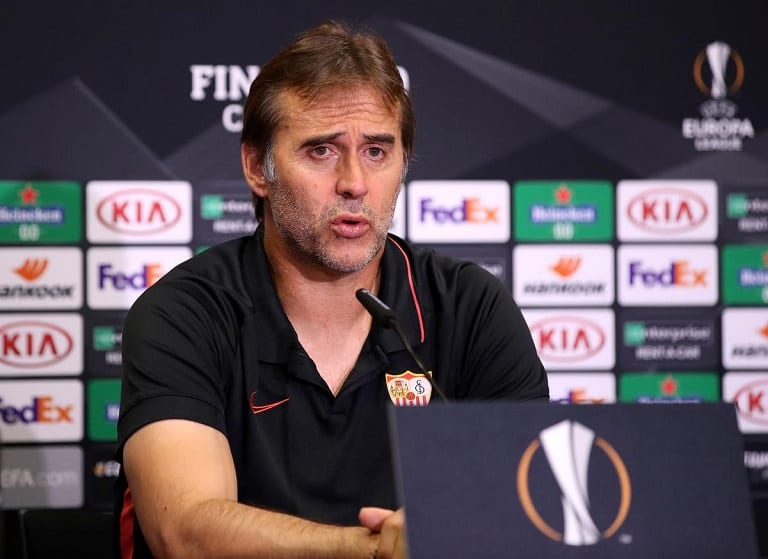 Sevilla heaped praise on their Europa League final opponents Inter Milan ahead of Friday’s showpiece game, warning that any mistakes they make will be mercilessly punished by Antonio Conte’s side.

Sevilla have won Europe’s second-tier competition a record five times but Inter are favourites after trouncing Shakhtar Donetsk 5-0 in the semi-finals, with forwards Lautaro Martinez and Romelu Lukaku in sparkling form.

“Inter are team full of world-class players, but we are excited about the final and determined to put in a great performance,” Sevilla coach Julen Lopetegui told a news conference on Thursday.

“We will have to play to our strengths and be a team that works hard for each other as well as a reliable one that plays as it knows how. Our opponents will ensure we will have to be at our very best.”

“Our opponents are very difficult to play against and we have a lot of respect for them, it’s going to be one of those games which are decided by the finest of margins,” he said.

Serbian midfielder Nemanja Gudelj said Inter were a side more worthy of the Champions League than the Europa League, but added that his team’s record in this year’s competition, in which they have knocked out AS Roma, Wolverhampton Wanders and Manchester United, gave them belief.

“If we go into this game as we have been playing recently we know we can beat any opponent. I have a lot of confidence in our team,” he said.

Conte, a Premier League winner with Chelsea and triple Serie A champion with Juventus as a coach, said he felt a sense of responsibility to win a trophy with Inter.

“The moment I accepted this job I said we had to try and win something and that perception has grown each day,” he said.

“I have got a very good group of players who always want to improve, to work hard, and now they have a chance to do something historic.”

The former midfielder also reflected on his experience in finals as a player ahead of Inter’s first European final since winning the 2010 Champions League under Jose Mourinho.

“We should be very proud of reaching a final after 10 years but we have to remember that only the winner goes down in history,” he added.

“I played many finals as a player, I won one Champions League final but lost three and I’ve realised that only the winner is remembered, so that should give us extra motivation.”