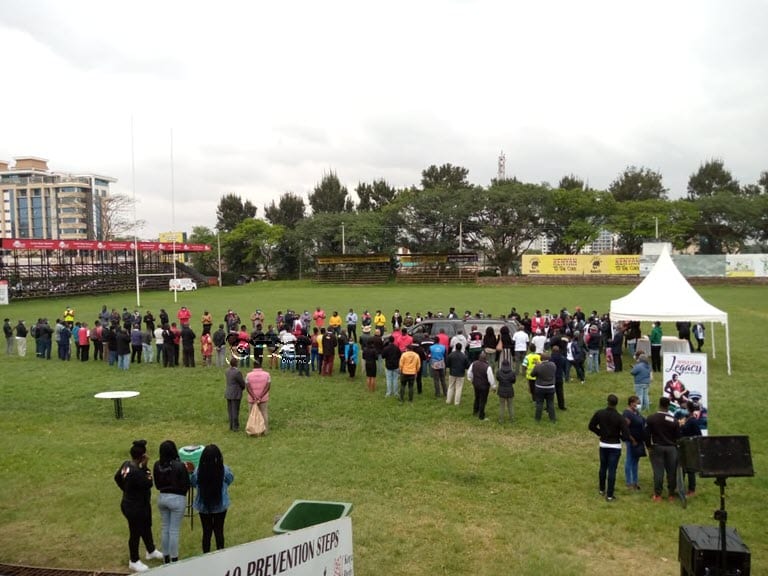 Family, leaders in rugby and the political class as well as hundreds of fans gathered at the RFUEA Grounds today to honour and remember Benjamin Ayimba who died last month from multiple complications.

Family, peers and friends got on stage to acknowledge the impact the rugby legend, who died aged 45, had on their lives as well as the sport.

His eldest son Brian rallied the family to unite and weather through the grief and future challenges together.

“Thank you for staying with us for the last five months my dad was in hospital and thank you for the support in prayers and financially,” Brian said.

“I only played rugby once in high school and after I was tackled hard I went back to basketball but with Ayimba demise I now shift to rugby from my favourite sport which is soccer,” said Kalonzo.

The former vice president urged the government to start a Benjamin Ayimba rugby foundation for his achievements adding that anybody playing for the national team to be employed by the government.

Richard Omwela, who was the chairman of the Kenya Rugby Union (KRU) when Ayimba guided Shujaa to their historic triumph in Singapore said his place in Kenyan rugby is eternal.

The KRU chairman Gangla Oduor thanked everyone who supported Ayimba.

“Mine is to appreciate a few people because I gave my tribute in the recent mass service first of all I will thank the Ayimba family for allowing him follow his dream in rugby, the patron president Uhuru Kenyatta for his support, the ministry of sports, culture and heritage, former prime minister Raila Odinga, former vice president Kalonzo Musyoka who was in the event, CITAM church, Oscar Osir who has been with Ayimba since he hailed and everybody who supported us,” said Oduor.

Oduor added that all the tributes given were all true.

Former Fiji head Coach Ben Ryan who lost against Ayimba in Singapore said he learnt a lot from Ayimba.

“We talked a lot as coaches he made me laugh I still remember when I lost against him I learnt a lot thank you Benjamin I will always remember his memories RIP Benjamin,” quoted Ryan.

Former KRU chairman Mwangi Muthee termed Benjamin as a servant of everything.

“When I saw him at a tender age I saw hope under his then head coach Bill Githinji and later as a chairman he fought for everything, what I can say the world of rugby owes Benjamin, may his legacy continue RIP Ayimba, ” said Muthee.

KRU director John Kilonzo who was the chairman of the sub committee in all the preparations and the days event master of ceremony termed Ayimba as a person with passion for knowledge and who believed in everything he did.

Ayimba coached local clubs as Impala Saracens where he was also a player and captain, Nondescript, Harlequins and Mean Machine and they paid their last tributes.

“Condolences from Impala you cannot talk about rugby without the name Ayimba he was full of determination and gave his whole at Impala he played hard and sacrificed himself for glory Benja was royal for Kenya,” Charles Ngovi Impala.

“On behalf of Nondies to the family ‘pole sana’ and we console with you, Nondies will continue with the relationship we had, I will personally miss him, ‘Benja’ influenced us let’s keep his fire burning,” Auka Gacheo Nondies.

“Benja was a great coach at Quins he brought change in our team and he always told players to stick to their plan and he also brought the aspect of preparation at Quins, we’ll carry your memories in our hearts RIP ‘Benja’,” Victor Sudi Quins.

Ayimba will be laid to rest on Friday in Uranga, Siaya County.