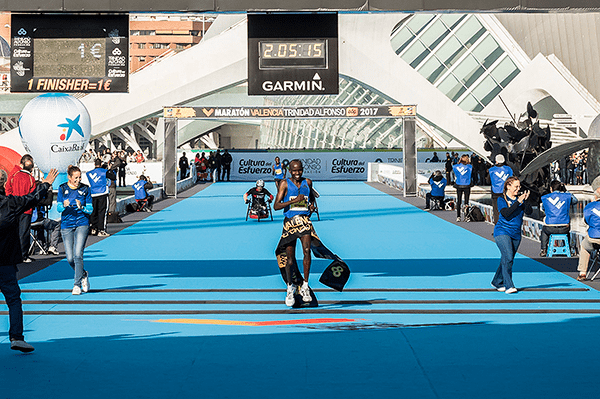 The 31-year-old Kitwara clocked 2 hours 5 minutes and 15 seconds to take the men’s race honours commanding a 1 and 2 Kenyan finish.

Ethiopia’s Aberu Mekuria Zennebe won the women’s race in 2:26:17 to improve on her fourth-place finish from last year. The 33-year-old finished almost a minute ahead of Belarusian Volha Mazuronak.

Boosted by five pacemakers, the men’s opening splits were quite fast with the large lead group going through the five and 10-kilometre points in 14:54 and 29:46 respectively. By then, all the main favourites – Kenya’s Evans Chebet, Emmanuel Mutai and Sammy Kitwara – ran close together in ideal weather conditions of 12C and no wind.

The main pacemakers, Kenyans Kilimo Rhonzas and Daniel Muteti, led the leading group to successive splits of 44:41 for 15 kilometres and 1:02:46 at halfway. With 10 athletes still in the lead group, hopes were high that the winning time would be well inside the 2:06:13 course record.

The 25-kilometre point was reached in 1:14:32 and shortly afterwards Mutai, a 2:03:13 performer back in 2014, became the first notable athlete to fall back. The rhythm even heated up in the following five-kilometre section which was covered in a frantic 14:38 for an overall time of 1:29:10 at 30 kilometres with Kitwara running comfortably in the lead. That increase of speed whittled down the leading pack from 10 to five men in the guise of Kitwara, Chebet, Ethiopian duo Aberu Kuma Lema and Deribe Robi Melka plus Eritrea’s Samuel Tsegay.

The key movement came at the 33th kilometre when Kitwara and Chebet pulled easily away from the rest of the heading group to open a sizeable margin over the Ethiopians and Tsegay, who had taken a fall, which hampered his effort from then on.

The Kenyan pair went through the 35th kilometre in 1:44:18 to suggest a Spanish all-comers’ record was more than likely as they had a big 45-second margin on the previous best.

Kitwara broke away from Chebet at exactly the 39-kilometre point to face the closing three kilometres in solitude. The long-legged Kenyan ran majestically during the closing stages to gradually increase his lead over Chebet, while Lema and Melka got rid of Tsegay in the fight for the third place on the podium.

Once inside the final kilometre, the only question mark remaining was whether Kitwara would be capable to finish inside2:05. Although he finished 15 seconds outside that barrier, his eventual winning time of 2:05:15 was still 58 seconds ahead of the previous all-comers’ record set in 2015.

Having failed to finish his three other marathon attempts this year (Boston, Berlin, Amsterdam), Kitwara finally achieved his target of completing a fast effort. By clocking 2:05:15 his second quickest time to date, bettered only by the 2:04:28he ran in Chicago three years ago. He also ran the second half faster than the opening one, 1:02:46 and 1:02:29 his respective halves.

“Despite my previous DNF’s this season, I knew I was in very good shape and I finally managed to prove it here in Valencia,” said Kitwara, who will turn 32 next Sunday. “I felt very comfortable throughout and managed to finish very strongly.”

Chebet finished 15 seconds behind Kitwara, taking one second off his PB with 2:05:30. Melka prevailed over Lema in the battle for third place, 2:06:38 and 2:06:44 their respective performances.

In addition to Kitwara’s record, also witnessed the best ever depth on Spanish soil as six men finished within 2:08:00.

The women’s race opened at a steady 3:26/3:27-per-kilometre rhythm set by the pace-makers, Emmanuel Biwot of Kenya and Italy’s Simone Pessina.

Surprisingly, the fastest woman in the field, Belarus’s Volha Mazuronak, decided not follow that kind of pace and by 10 kilometres she was 26 seconds in arrears (34:19 vs 34:45) from the lead group, which included Ethiopians Aberu Mekuria and Aynalem Kassahun Teferi, Kenya’s Winnie Jepkorir, Polline Njeru and Noemi Chepkorir plus Portugal’s European half marathon champion Sara Moreira.

The halfway point was reached in 1:12:53 which didn’t suggest an improvement on the course record of 2:24:48. Former race walker Mazuronak, who finished fifth in the marathon at last year’s Olympics, was 43 seconds behind the lead pack.

Moreira was the first athlete to leave the lead group. Mekuria, meanwhile, continued to run close to the pacemakers and soon became the only athlete capable of living with their pace.

In a masterfully judged race, Mazuronak started overtaking her opponents one by one. By 40 kilometres, she had caught everyone apart from Mekuria and Jepkorir.

Mekuria managed to hold off her rivals to win in a season’s best of 2:26:17 in what was her fourth marathon of the year. Fast-finishing Mazuronak overtook Jepkorir in the closing 500 metres to finish second in 2:27:14 in her first marathon of the year, having covered each half in almost identical splits of 1:13:36 and 1:13:38. Jepkorir finished four seconds adrift in third; taking 34 seconds off her lifetime best.