How football legend Drogba, helped to halt civil war in his home nation

Al-Merrikh Stadium, in Sudan’s second largest city of Omdurman, is not one of the world’s great gladiatorial arenas. Yet this small ground – known as the Red Castle – became the setting for one of football’s most extraordinary tales.

The date was 8 October 2005. The mathematics of qualification for World Cup 2006 were simple. A win for Cameroon against Egypt would see them reach their sixth tournament. Anything less would allow Ivory Coast, playing in Sudan and just a point behind, to leapfrog them and qualify instead – for the first time.

The tag “golden generation” can be a substantial yoke to bear, but the Ivorian squad in 2005 was just that. They were led by the artfully bruising Didier Drogba, with Kolo Toure, Emmanuel Eboue and Didier Zokora all also shining in the Premier League, a world away in London.

Yaya Toure, then with Greek side Olympiakos and still considered raw, was waiting in the wings. This was a squad that could match anything on the African continent. Despite having lost twice to Cameroon in qualifying, they remained agonisingly close as they took to the pitch in Sudan that evening.

Yet, while Ivory Coast’s footballing stars stood on the verge of history, back home the country teetered on the edge of something dark. A civil war that began in 2002 had divided the country, with President Laurent Gbagbo’s government controlling the south and a rebel faction known as The New Forces of Ivory Coast, led by Guillaume Soro, controlling the north.

Fighting broke out on 19 September 2002 with rebels attacking various cities across the country. Sebastien Gnahore, an ex-footballer who fled Ivory Coast, recalls those times.

It was awful. When I called my sister I could hear the shooting outside the house,” he says. “They all hid under the bed for four days, and only came out to find food.

“All I cared about was whether my family was going to be OK. That’s the only worry I had each morning.”

The initial violence was fierce but short-lived, as both sides became quickly entrenched along a north-south divide. Much of the fighting had ended in 2004, but tensions were rising once again in 2005. The future of the West African country looked bleak.

Modern footballers can seem a world away from the everyday man and woman. The money involved can catapult them into a different realm, and the results can be unpalatable. But the Ivorian players that evening, despite their multi-million-pound lives in Europe, knew much more was at stake. And nobody encapsulated this quite like the man who led their line, and who was about to take centre stage.

Didier Drogba had arrived at Chelsea in 2004 for a reported fee of £24m. His nine-year stay in the Premier League was synonymous with a number of things – including a brutally effective, bulldozing style of centre-forward play and accusations ranging from unsportsmanlike behaviour to outright cheating. Love him or hate him, his achievements in west London were unquestionable. 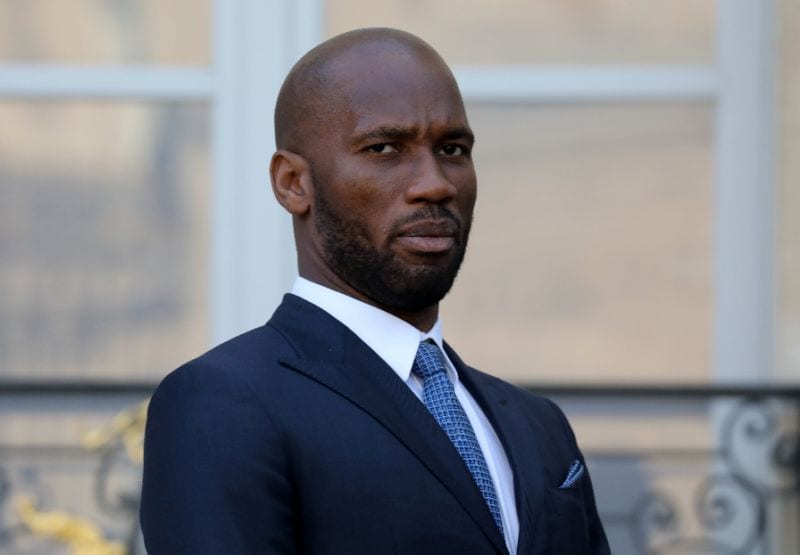 Four Premier League titles, four FA Cups, three League Cups and a Champions League winner’s medal. Arsene Wenger, whose Arsenal side frequently found themselves on the wrong end of Drogba’s brutal style, said of him: “He is a winner and he will be like that until the end of his life.”

Drogba was indeed a serial winner, but the pressure on that October night in Sudan was entirely different.

Cameroon’s match against Egypt in Yaounde and Ivory Coast’s fixture with Sudan kicked off simultaneously. Ivory Coast, knowing nothing less than a victory would do, made short work of a Sudanese side second-bottom in the group. In the 73rd minute, Aruna Dindane tucked away his second goal, and the team’s third.

An 89th-minute Sudanese strike was no more than a consolation. Events were unfolding relatively straightforwardly – but nearly 1,600 miles away in Yaounde, the picture was very different.

Cameroon took the lead in the 20th minute, but the game was tight. A 79th-minute equaliser, bundled in by Mohammed Shawky, brought Egypt level and swung the tide back into the Ivorians’ favour. A draw – so long as they beat Sudan – would see them qualify.

With just seconds remaining in Yaounde, and with the score locked at 1-1, Ivory Coast looked set for their maiden trip to the World Cup. Their match in Sudan had finished. Drogba was standing, surrounded by his team-mates. They were all listening to the radio and waiting. Then the crushing news filtered through. Cameroon had been awarded a soft penalty in the fourth minute of injury time.

For every tale of heartbreak, there must be one of joy. Pierre Wome’s spot-kick crashed against the left-hand post and flew wide. The Cameroon players gathered, dazed and despondent in the penalty area, some pulling their shirts over their eyes. On the other side of the continent, Ivory Coast erupted. For the first time in their history, they would compete at the highest level of international football.

“The whole country – every person, every house – was happy. That day we all forgot the country was still divided,” says Hassane Omar, a 20-year-old student in Abidjan at the time.

For all the breathless footballing drama that took place that night, the most seismic event did not occur on the football pitch, but in the cramped away dressing room at the Al-Merrikh Stadium. A post-game prayer led by Drogba had become something of a ritual, but this would be different.

With the celebrations unfolding, a TV camera was ushered into the changing room. The players huddled before it, their arms draped across each other’s shoulders. Standing in the centre, microphone in hand, was the imposing figure of the Chelsea striker.

‘Please lay down your weapons and hold elections,’ Drogba urged

“Men and women of Ivory Coast,” he began. “From the north, south, centre, and west, we proved today that all Ivorians can coexist and play together with a shared aim – to qualify for the World Cup.”

“We promised you that the celebrations would unite the people – today we beg you on our knees.” On cue, the players sank to their knees.

“The one country in Africa with so many riches must not descend into war. Please lay down your weapons and hold elections,” Drogba urged. The clip, available on YouTube, is barely a minute long and ends with the players on their feet once more.

“We want to have fun, so stop firing your guns,” they sang joyously. Back home, the party had already started. There were reports of a conga line outside the Egyptian embassy as Ivorians showed their appreciation for the draw in Cameroon. Even the rebel capital of Bouake bounced to the beat of victory that night.

For all the revelry, and for all the ‘Drogbas’ – bottles of beers renamed in the striker’s honour – Ivory Coast still woke up the following morning in the same situation, as a deeply divided country. 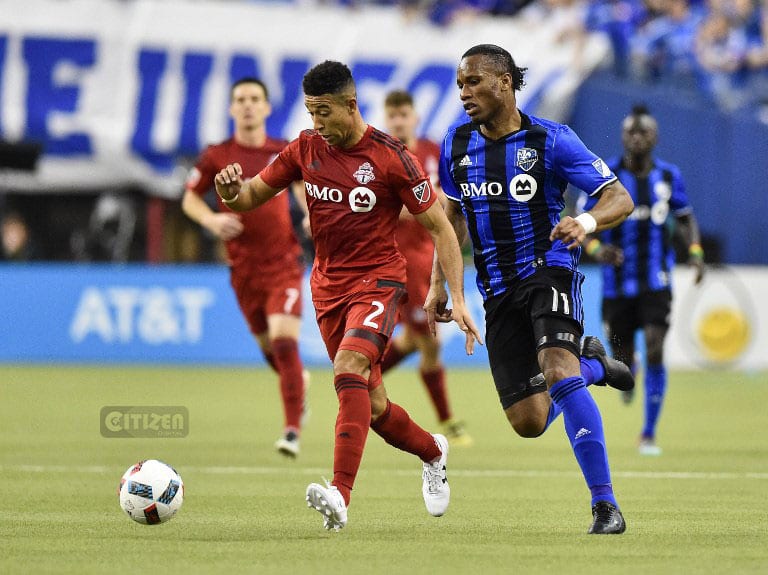 Yet something was stirring and the following weeks and months were to see a dramatic change. The video clip played relentlessly on television as if the sheer force of media exposure might be enough to enact change. And change did follow. Both sides moved closer to the negotiating table and a ceasefire was finally signed.

While any Hollywood scriptwriter would have been proud of this ending, the story was not quite finished. At the 2006 World Cup, Ivory Coast had been knocked out at the group stage, losing to Argentina and the Netherlands before beating Serbia & Montenegro. It was a respectable first performance.

The following year, an extraordinary announcement was made by Drogba, while touring the rebel-held area of his homeland after claiming the African Footballer of the Year award.

Ivory Coast’s home match and Madagascar, due to be played on 3 June 2007, would not be played in Abidjan as scheduled, he said, but instead in Bouake, the symbolic centre of the rebellion. This would have been unimaginable just two years before. Whether presidential permission was given for Drogba’s announcement is still not entirely clear.

“Bearing in mind Drogba is from the south – from Gbagbo’s area – he was just like a god at the time,” says Austin Merril, a reporter who was in Ivory Coast working for Vanity Fair magazine. The atmosphere that day in the northern city crackled with anticipation.

“It was completely bonkers,” adds Merrill, who drove behind the team bus on the way to the stadium with a heavy military presence. People rode on top of cars, weapons slipped from the grasp of excited soldiers. Inside the stadium itself, government and rebel troops hurled football chants back and forth. It was a marked change from the violence of the recent past.

“It felt like more than just football,” recalls Omar, who was watching on TV in Abidjan. “Everybody had stopped work at 12 o’clock and was drinking beer or champagne. We were all so happy.”

On the pitch, any notion that the script would not be a fairytale was dispelled when Salomon Kalou tapped in on 18 minutes. The goals kept coming. With just five minutes to go, and with Ivory Coast leading 4-0, the stage was set for the spectacular finale everybody had hoped for.

A lofted ball from midfield dropped behind the defence, into the path of the onrushing Drogba. Delicate control and a delightful second touch took him round the goalkeeper, and he slid the ball into an empty net. The explosion of noise defied the stadium’s modest capacity.

The country’s messiah wheeled along the running track in celebration, players and supporters streaming in his wake. Above him in the stands, old adversaries celebrated together.

The final whistle brought fans rushing on to the pitch, with security personnel forming protective screens around the players, most of all Drogba. The symbolic gesture of the game in Bouake seemed to have united a country once again.

“It was euphoria across the whole country, everybody came together,” says Gnahore. “We had so much hope in Drogba and his team. The Toures from the north, Drogba from the south. It was a true Ivorian mosaic.”

However, what followed was sadly very different. With divisions running deep, and memories short, the euphoria surrounding those two matches began to fade. Just five years later, violence again gripped the country after disputed elections, resulting in the deaths of 3,000 people and culminating in the arrest of President Gbagbo and his eventual trial at the Hague for crimes against humanity.

In January 2019, he was acquitted on all charges. One year on, he remains in custody in Belgium, pending the outcome of an appeal, with Ivory Coast still in a delicate political state.

Ivory Coast’s ‘golden generation’ never truly fulfilled their potential, losing on penalties in the final of the African Cup of Nations in both 2006 and 2012. Their star power dwindled in response. Perhaps it was simply impossible to follow on from the seismic events of 2005 and 2007.

Drogba retired from football in 2018 after a glittering career that saw success in six countries, with a place in the pantheon of African greats – if not world greats – already assured. But he and his team-mates were responsible for something far bigger than just footballing glory.

“They showed that we could still live together, that we could be the Ivory Coast that we had been before. It wasn’t about football, but rather the unification of a country,” says Omar.

Drogba and his team-mates didn’t single-handedly stop the civil war. But over the course of two football matches, they did at least give their beleaguered country a reason to hope.

This report is by the BBC, written by Olivier Guiberteau.