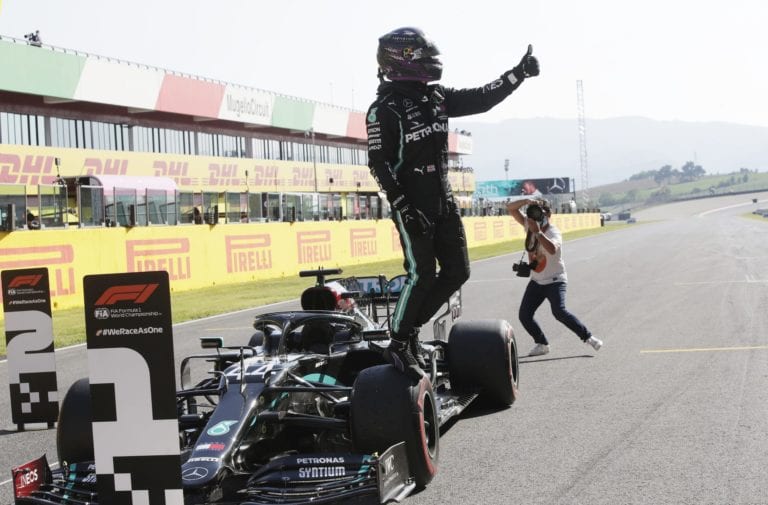 Lewis Hamilton clinched a seventh World Championship and became the most successful racing driver ever with a masterful victory in the Turkish Grand Prix on Sunday.

Victory at a treacherously wet and slippery Istanbul Park track in a topsy-turvy race was the 94th of the 35-year-old Briton’s career.

As he received the congratulations of his team, Hamilton was almost overcome with emotion in the car after the race, saying: “To all the kids out there, dream the impossible.”

Once out of the car, he added: “Seven is just unimaginable but when you work with such a great group of people and you really trust each other, there is just no end to what can do together.

“I feel like I’m only just getting started, it’s really weird.”

Hamilton, who does not yet have a contract for next year, added that he would “love to stay” in F1 and wanted to continue to campaign for change when it comes to human rights, diversity and environmentalism.

How Hamilton won it in style

It was a drive befitting the monumental nature of Hamilton’s achievement.

Hamilton trod carefully in the opening stages of the race and even made a couple of small mistakes as the drivers fought for grip in the wet conditions.

By five laps in he was in sixth place well over 20 seconds off the lead, held by Racing Point’s Lance Stroll, ahead of team-mate Sergio Perez.

After all the leaders made an early stop for fresh intermediate tyres, Hamilton was stuck behind Ferrari’s Sebastian Vettel, faster but unable to pass because of the lack of grip off line.

But the race opened up for Hamilton at around half-distance as he once again made decisive strategy calls on tyres from the cockpit and drove with the skill and class that has enabled him to put himself in this position.

Stroll and Perez began to be caught by those behind.

Red Bull’s Max Verstappen was the first to pressure them, but fell out of contention when he lost control and spun behind Perez on lap 18, destroying his tyres and needing to stop again.

Ferrari pitted Vettel for fresh tyres on lap 33, having seen how quickly team-mate Charles Leclerc was going on his fresh intermediates, and then Albon spun at Turn Four.

That gave Hamilton a clean run to attack the Racing Points and he told his team: “Don’t box [pit] me, man.”

Despite Stroll saying he did not want to change tyres, Racing Point did pit the Canadian on lap 36, removing him from the lead and, shortly afterwards, Hamilton took the lead from Perez and never looked back.

Hamilton and Perez stayed out on worn tyres, as the Mercedes driver pulled away in the lead, his only concern being whether his worn intermediate tyres would last.

And Hamilton’s excellence was put into stark perspective by his team-mate Valtteri Bottas.

The Finn went into the race knowing he had to out-score Hamilton by at least eight points to keep the championship alive. But he had a dreadful day, spinning at least five times and finishing 14th, lapped by Hamilton.

When told there were four laps left late in the race, a downcast Bottas said: “I wish it was less.”