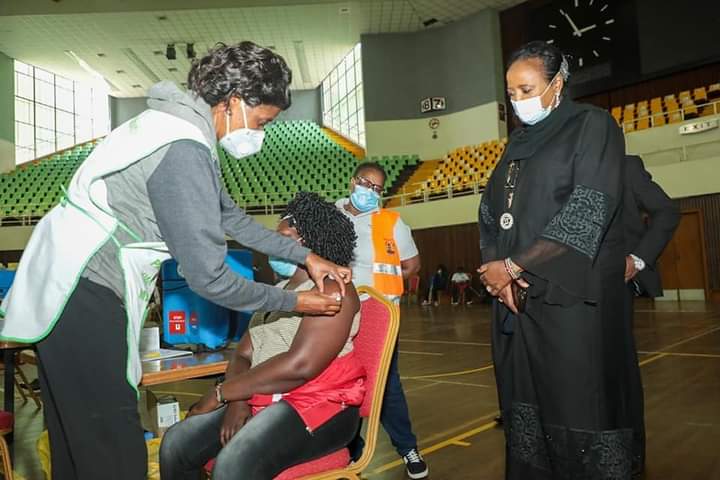 Harambee Starlets players and the entire team’s staff will be the first football team to be administered with the Covid-19 vaccines on Friday afternoon, as Football Kenya Federation (FKF) and the Ministry of Sports rush to secure a safe return to elite football action.

The Football Kenya Premier League (FKF-PL) teams will then follow suit from Saturday, those in Nairobi taking lead before the exercise is taken to other counties where various teams are based.

According to the FKF, the first federation to secure the jabs through the Ministry for teams not going to the Tokyo Olympics later this year, the move is aimed at enabling a quick return to the now suspended premier league as a measure to curb spread of Covid-19.

“Whereas FKF remains cognizant of the current Covid-19 situation in the country and the salient need to adhere to the existing health regulation, the federation requested the government to consider the resumption of football activities in strict adherence with the FKF/CAF Covid-19 protocols and the Ministry of Sports guidelines.

“Further, the federation also requested that all football players and all members of the technical benches involved in the Premier League be considered for the ongoing Covid-19 vaccination to mitigate the virus among athletes. Consequently, in preparation for the return of football activities and for the safeguarding of players safety, vaccinations for all clubs within Nairobi County will be carried out on Saturday…” reads part of a letter addressed to the FKF-PL clubs.

Each club will see 30 players and 10 officials vaccinated, according to FKF. The development could mean return to the sport soon, thus avoiding a possibility of nullifying the league as some pundits had feared.

Although the exercise involves only the Premier League clubs only and the Harambee Starlets so far, FKF is pushing for the National Super League (NSL) teams and further the lower divisions to be considered for the jab by the government.

On Thursday, Sports CS Amb. Amina Mohammed said the priority is on the athletes set to represent Kenya in the forthcoming Olympic Games in Tokyo – Japan, come July this year.

By the time President Uhuru Kenyatta announced the ban on all sports activities in the country a fortnight ago, FKF-PL was headed to round 17 with Tusker FC on the summit with 36b points.