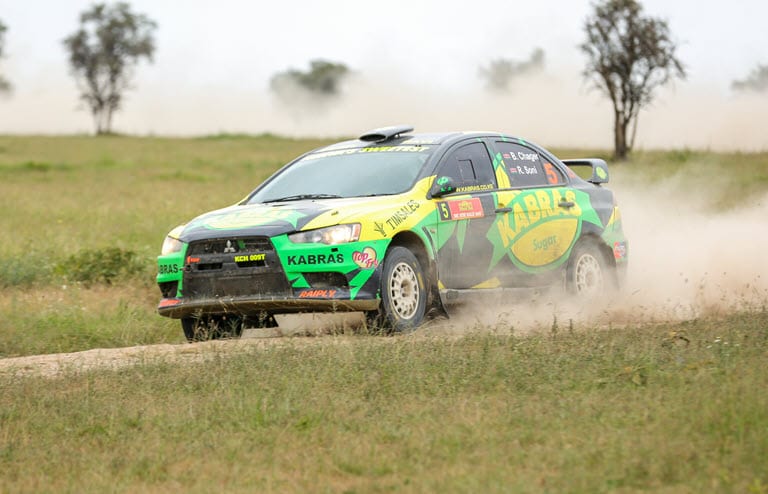 KNRC leader Baldev Singh Chager has kick-started preparations for next month’s KCB Mombasa Rally slated for Kilifi County on the weekend of August 16-17.

The ‘Flying Singh’ has two wins under his belt and hopes to be well prepared and competitive as he resumes his title hunt against R4 Mitsubishi Evolution 10s and R5 Skodas.

Nevertheless, the reigning Safari Rally champion who will be piloting a Mitsubishi Evolution 10 R4 machine still insists that Skoda Fabia R5 speedsters will be hard to beat all the way through the season.

After chalking-up double points on the WRC Candidate Safari Rally, Boldy is favorite to clinch the KNRC title this season.

“Preparations have been running at full throttle and we are hoping to defend Mombasa Rally and indeed safeguard our championship lead.”

“I’m approaching Mombasa round with lots of respect despite all the confidence generated from my back to back wins. The strategy on Mombasa Rally is like every other KNRC; really nothing different at all.

“We go out to do the best we possibly can. For now, we are just going through the cars after Safari, so they are mechanically fit. R5s will better through and through-there’s no comparison with Evos. Tundo and I were just lucky on Safari when Manvir’s Skoda R5 sucked in dust and Onkar was out of the event,” Chager said.

Chager who has two wins under his belt will be going for a hat-trick in Kilifi with Tundo gunning for his first win of the 2019 KNRC season.

Skoda Fabia R5 speedster Onkar Rai won the season opener in his Nakuru backyard earlier in the year while Chager emerged the victor on Kajiado Rally and WRC Candidate Safari.

Meanwhile, preparations for Mombasa Rally are in top gear, according to Mombasa Motor Club (MMC) Chairman, RoyMcKenzie. McKenzie said cars will traverse stages around Mombasa Cement Limited farm  in Vipingo and Bamba which has over the years been synonymous with MMC events.

“The route promises to be a good mix of everything from technical, flat out and twisty. It will definitely be a good challenge for both drivers and navigators,” addedMcKenzie.

KCB Bank Kenya in January committed Kshs.75 million towards motorsports for the next three years, making a comeback as title sponsor of the Kenya National Rally Championship (KNRC).