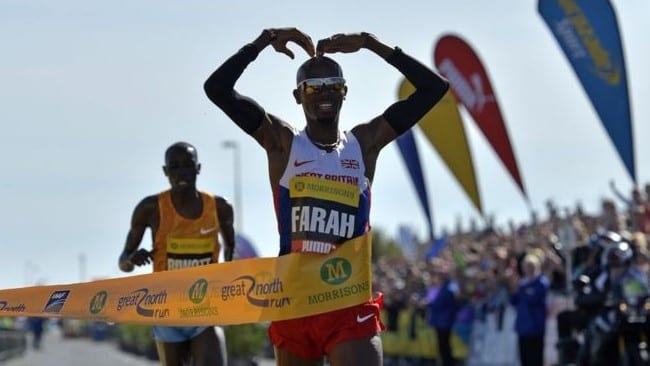 The four-time Olympic champion pulled clear of America’s Dathan Ritzenhein to complete the course between Newcastle and South Shields in a time of one hour and four seconds.

“I knew it was going to be a hard race today,” Farah told BBC television. “To be honest, I’m knackered. I can hardly talk.

“It’s good to finish on a high here. What a year I’ve had. I just have to go home now and chill out and see the kids.”

Farah’s victory in the world’s biggest half-marathon came after he completed a second consecutive Olympic double in the 5,000 metres and 10,000 metres in Rio de Janeiro.
Farah, 33, endeared himself to the large crowds watching by mimicking the goal celebration of former Newcastle United striker Alan Shearer as he finished, raising his right hand in the air.

Farah’s triumph follows accusations made by his wife, Tania, who also ran in the race, that he was “humiliated” by an airline attendant in the United States.

She told the Sunday Telegraph a Delta Airlines official “yelled” at her husband and sent him to the back of a queue.

Other reports said the Farah family had arrived late for first-class boarding.

The family were reportedly travelling home from Rio and were about to embark on the final leg of their journey from Atlanta to Portland, Oregon.

A Delta Airlines spokesperson, quoted by the BBC, said the company was investigating and “will be working directly with the Farah family”.

Neither Delta Airlines nor Mo Farah’s management company could be reached by AFP.