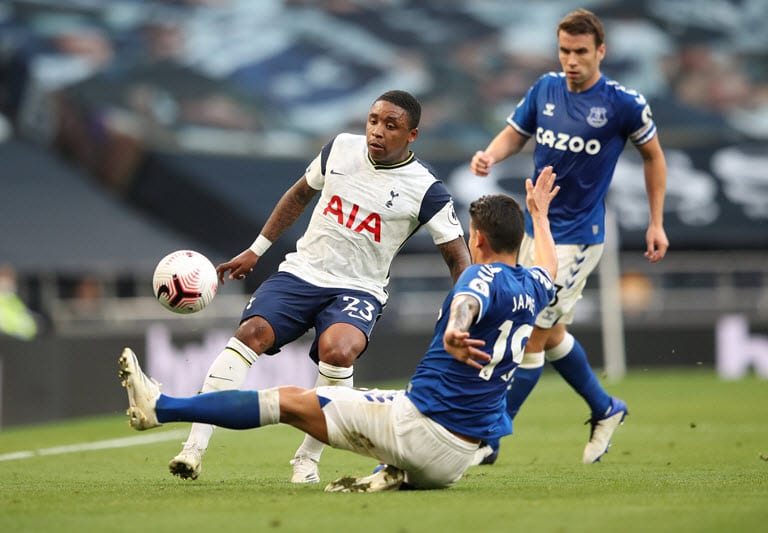 Dominic Calvert-Lewin’s brilliant header ensured new-look Everton made a flying start to the Premier League season with victory at Tottenham.

Calvert-Lewin gave Hugo Lloris no chance after getting connecting with Lucas Digne’s in-swinging free-kick to earn the Toffees a first win over Spurs since 2012.

In a high-octane encounter, Jordan Pickford produced two excellent saves to keep out Dele Alli and Matt Doherty, who was making his debut after signing from Wolves.

But with new signing James Rodriguez in excellent form, Everton fully deserved their win after a hard-working performance.

Everton should have taken the lead in the early stages but Richarlison lost his footing after rounding Spurs keeper Hugo Lloris.

As well as Rodriguez, Brazil’s Allan and Watford’s Abdoulaye Doucoure have also been drafted in to provide energy and creativity in the engine room – and all three gave Ancelotti huge encouragement for the season ahead.

Rodriguez, in particular, stood out, with his quality passing and created five opportunities for his team-mates, the most by a player on their Premier League debut since Alexis Sanchez back in August 2014.

The Toffees could – and should – have won by a more handsome margin against a static Tottenham side short of ideas.

Rodriguez twice picked out Richarlison after half-time but the Brazilian, who wasted a great chance in the first half after sprinting past Toby Alderweireld and rounding Lloris, was unable to punish Spurs.

Allan, who played under Ancelotti at Napoli, was calm and composed as Everton looked rejuvenated after a poor 2019-20.

Pickford’s saves to keep out Alli and Doherty were crucial, with Ancelotti delighted with a clean-sheet win against a side that finished 10 points and six places above them last season.

Spurs boss Jose Mourinho was unhappy with Everton’s goal, claiming the free-kick which led to Calvert-Lewin’s winner was taken from the wrong place.

But over the 90 minutes, Spurs were distinctly second best and their lack of threat was summed up by the fact Harry Kane only touched the ball twice in Everton’s penalty area.

Son Heung-min was Spurs’ most threatening player, particularly in the first half when he set up chances for Kane and Alli.

Kane looked a shadow of the player who finished last season with five goals in three games while Alli, despite forcing a fine save from Pickford, was replaced at half-time.

Mourinho said before the game that he wanted a new striker before the transfer window closes next month and this performance will reinforce his need to strengthen the squad.

New signing Pierre-Emile Hojbjerg also started but was unable to have the same impact as Everton’s new additions.