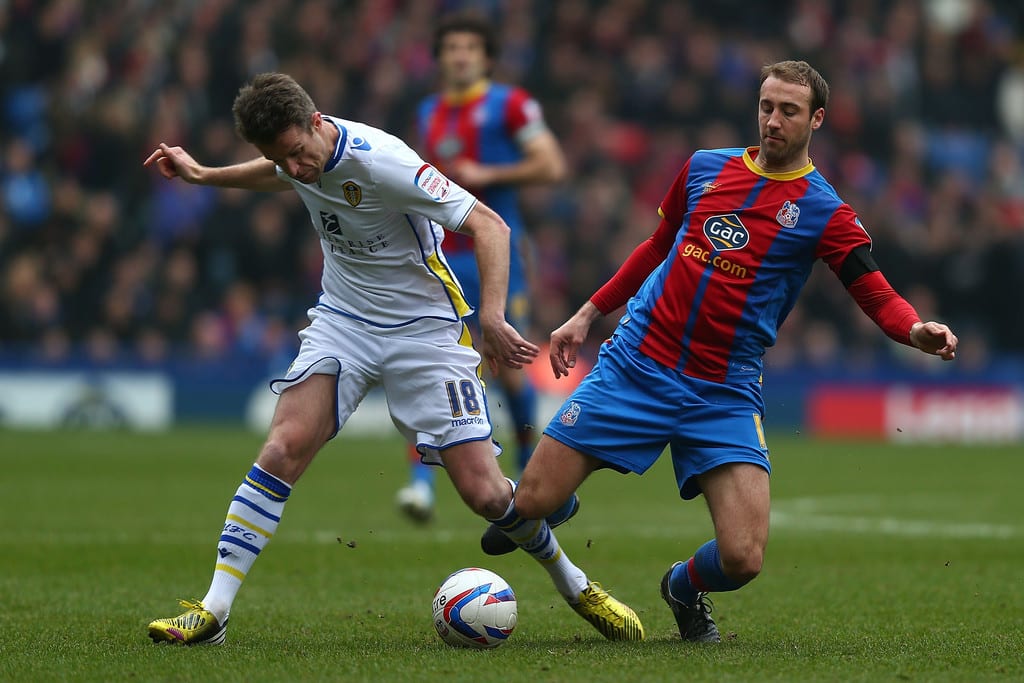 Eberechi Eze registered his first Crystal Palace goal with a sublime free-kick as Roy Hodgson’s side thrashed Leeds United 4-1 in an entertaining match at Selhurst Park.

Scott Dann headed in Eze’s corner to put Palace ahead after 12 minutes, before £19.5m summer signing Eze, 22, curled his set-piece expertly into the top corner.

Leeds striker Patrick Bamford had been denied an equaliser when his excellent, chipped finish was ruled out by the Video Assistant Referee because of his outstretched arm being offside.

But Bamford, who endured a difficult loan spell with Palace in 2015, took his next chance just as well, controlling Mateusz Klich’s header with his chest before firing into the bottom corner.

Palace’s two-goal advantage was restored before half-time as Helder Costa conceded an own-goal in attempting to block Patrick van Aanholt’s cross from the left.

Pascal Struijk headed narrowly wide and Ezgjan Alioski was denied as Leeds chased a second-half response, but Jordan Ayew put the result beyond doubt with Palace’s fourth on 70 minutes.

Crystal Palace moved up to sixth with victory, three points behind leaders Southampton, as Leeds dropped to 14th.

A disappointing 2-0 defeat by Wolves last Friday saw Hodgson’s side punished for a slow start at Molineux – one from which they could not recover. They could ill afford the same against Leeds.

With Eze and Ayew handed starts – along with James McArthur in place of suspended captain Luka Milivojevic – Palace duly responded at Selhurt Park as Eze set up Van Aanholt to force an early save from Illan Meslier.

Eze’s influence grew from there as the England youth international offered boundless energy in both attack and defence, though it was his quality from set-pieces which allowed Palace to stamp their authority.

After Dann managed to squeeze his header past Meslier’s fingertips, Eze, in just his third Premier League start since moving from Queens Park Rangers, won his free-kick with a driving run before whipping the ball over the wall with power and precision.

Unshaken by Leeds’ response, the hosts enjoyed good fortune as Costa’s own-goal restored a two-goal cushion and Hodgson’s side remained comfortable as Ayew slotted in from Wilfried Zaha’s pass to add gloss to the scoreline.

Palace have now already registered three or more goals in two of their eight league games so far, including their 3-1 win over Manchester United, despite failing to do so in any match last term.

After enjoying a run of one defeat in five games, Marcelo Bielsa’s side have now fallen to successive 4-1 defeats following Monday’s loss at Leeds.

Despite recording an impressive 3-0 win against Aston Villa in their game prior, Bielsa lamented a lack of “danger” created by his side six days ago. Eight goals conceded in two games would suggest the problem lies at the opposite end.

On the evidence of Saturday’s defeat, there appear to be few concerns in attack as Bamford continues to deliver some wonderful finishes – even if his best at Selhurst Park was not allowed to stand.

The 27-year-old made it seven goals in eight Premier League games after his well-taken goal put Leeds back in contention, but he had already been harshly denied with the score at 1-0.

Bamford’s arm was found to be offside by VAR as he pointed to where he wanted the ball to be played, though he responded with another great finish to demonstrate his progress since his loan spell at Selhurst Park – a stint that ended early because of a lack of opportunity.

Only defending champions Liverpool had amassed more shots after seven Premier League games than Leeds, but neither Struijk nor Alioski could find a breakthrough and Bamford headed wide as the game drifted from Leeds’ grasp.

‘It was a fair defeat’ – what the managers said

Crystal Palace manager Roy Hodgson told BBC Sport: “We played very well. It was important we had the tactical discipline that we had and important we played as well on the ball as we did. We took those opportunities well and were very good value for those four goals.”

“Wins are hard to come by and when you get one you have to be happy with that success, then come down to earth quick enough so you start from zero the next time you take to the field.”

Leeds manager Marcelo Bielsa said: “It is not only two games, it has been four games where he have conceded four goals. We are receiving a lot of goals.

“It was a fair defeat. It could have been by a shorter distance, the goals of Palace arrived when we looked like getting back into the game. Despite all the goals we are conceding, [Illan Meslier] has been performing to a high level.”