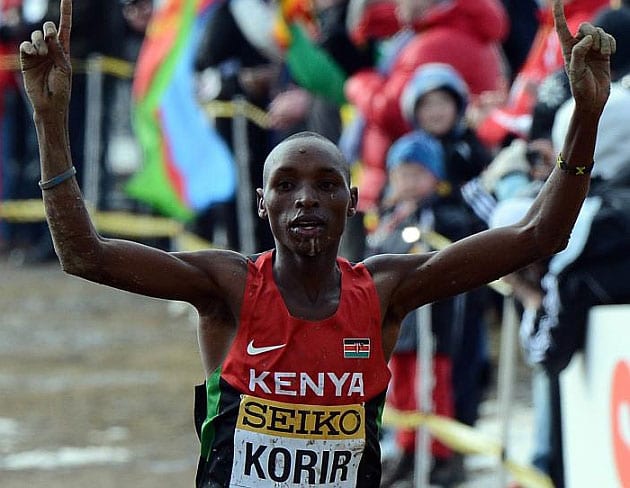 The biggest contest of the day served a truly world class contest among two athletes eyeing their place in Team Kenya for the Kampala World Cross.

Korir who has shown only flickers of the shape that led him to his stunning victory at the Bydgoszcz World Cross where he became the youngest ever winner of the Holy Grail of cross country running since showed battling qualities to beat Mukono on Saturday.

The home favourite that hails from Kilgoris had no match for the superior finishing of Korir who closed the race in 30:11 with his main rival clocking 30:18 as Geoffrey Koech who has a 13:28.07 personal best in 5000m closed the podium in 30:28.

Korir is aiming at reclaiming his World Cross title after being withdrawn from the team that ran at last year’s edition in Guiyang, China.

He was forced to withdraw from the Trials before being given outside selection when he ran at a half marathon in Europe two weeks before giving him scant time to recover for the IAAF Permit National Cross Championships.

Then Team manager John Kimetto disclosed that Korir, who made history when he became the youngest ever senior World Cross title aged 19 in Poland, had failed to hit form.

Korir was also the first Kenyan male athlete outside the Kenya Defence Forces to ascend to the World Cross throne following retired legends and five-time winners John Ngugi and Paul Tergat, two-time champion William Sigei and Joseph Ebuya who took it in 2010.

Moseti who signed for the Run Fast Management in United Kingdom simply blew away the competition to smithereens in the women’s senior race, motoring around the five 2km loops unchallenged to finish in 36:44.

Carolyne Chepkemoi (36:58) and Joyce Chepkurui (37:14) from Bomet finished in second and third having no answer to the winner who hails from Nyamira.

Kiprotich from Silbwet stopped the timer at 23:45 to win the junior men 8km after out-sprinting the hard chasing Duncan Kiprotich (24:04) for victory as athletes from Silibwet completed the 1-2 with Edwin Kosgei (24:05) finished third.

Chepkirui from Sotik ran away with the women 6km race title in 20:41 with Miriam Cherop (20:45) and Ruth Chepkemoi (20:46) filling the rostrum in a thrilling dash for victory.

Despite the quality of running that was on show, AK President Lt. Gen (Rtd) Jackson Tuwei lamented the low turn out at the event Poroko Friends Secondary School in Transmara West, Narok County.

He was further concerned by lack of talent from the area.

“The girls who were running here in the junior and senior women races, none was from Narok. We must prepare our girls and boys seriously and this is the beginning.

“This is the time for the coaches, officials and anyone else who is involved in identifying talent to start identifying them so that we can nurture their talent early enough,” the AK boss added.

He congratulated the region’s eminent athlete, two-time Olympics champion and record holder David Rudisha for being appointed the President of CAA Athletes’ Representatives.